Popular for his signature style and six pack abs, Usher is an American singer, songwriter, dancer, and actor. Being equipped with muscular yet lean body, the hot celeb seldom refrains from showing off his stripped body. Dashing Usher reached the height of name and fame after the release of his 13-million selling album, Confessions in 2004, and seldom saw himself in reverse direction afterwards.

The flamboyant celeb has been awarded with numerous awards and accolades, not just for his mesmerizing music but also for his cut physique. His sixth album “Raymond v. Raymond” apart from being certified by the RIAA also turned out to be his third album popping up at number one position in US Billboard 200. And his panache and mesmeric persona had him win the nomination of “Hot 100 artists of 2000s decade.” Eight times Grammy winner has shown dramatic transformation in his physique since entering into singing profession as a teenager. The popular star indeed lives in our eyes. He attributes both his prudent diet and regular workouts for his carved physique. 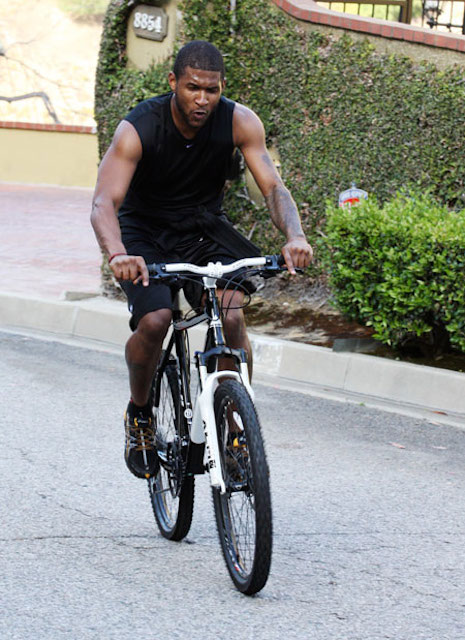 Six pack abs of Usher are not just matter of good genes, they in-fact testify the strenuous workouts he abides by, to uphold them in amazing shape. His workout routine inculcates plenty of exercises such as cardio workout, strength training, squats, crunches, cycling, Pilates, yoga etc. Pilates and yoga render suppleness to his body which further aids him in making difficult dance moves. He contends that you shall fetch your body out of its comfort zone to attain desired outcomes.

Usher works out under the guidance of his personal trainer, Cliff ‘Hollywood’ Boyce. While admiring his disciple, Boyce tells that the kind of dedication and commitment Usher shows towards workouts is rare to be seen in people. Very keen to uphold his muscular body, he is always prepared to take his workouts to higher levels. Intense workouts supported with junk foods are unlikely to bestow you flattering results, so be wary to maintain adequate balance between your workouts and diet. His daily workouts, which he names “forty minutes of funk” consists of skipping, stretching, jumping jacks, 1000 crunches, and treadmill exercise. 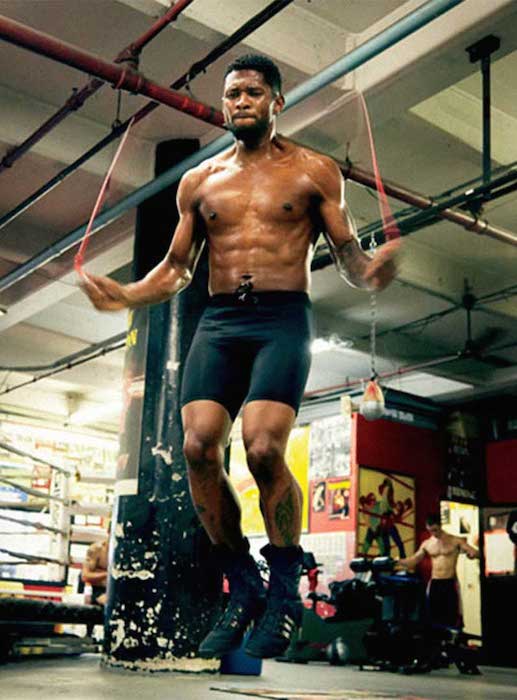 Apart from molding his body, Usher also doesn’t forget to gratify the relaxation requirement of his body. He frequently has his body get good massage. Massage enhances your blood circulation and suffices blood to different organs, thus enhancing their functioning. Apart from that, he also banks on contrast bathing to tone his skin. Contrast bathing implies five minutes hot water bath followed with five minutes cold water bath.

Health conscious Usher is also sentient about the role of brain having master control over the body. He comprehends the fact that chiseled body with restless mind is unlikely to sustain for long. He practices meditation daily for twenty minutes in a day. While doing meditation, he uses visualization techniques which certainly support him in making his personality charismatic. 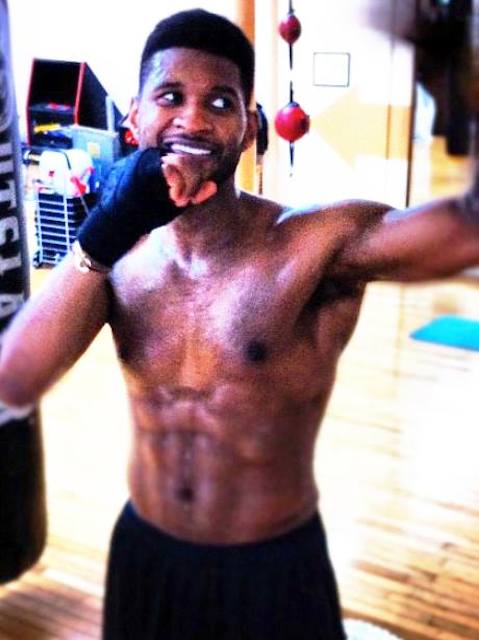 Usher shares, after losing his father in 2008 to cardiac attack, he became extra cognizant towards his diet. Since carb rich foods are mainly responsible for cardiac diseases, Usher swept myriad carb rich foods. He also restrained the consumption of animal foods having rich content of trans fat. Not only are plant based foods loaded with vital nutrients, they also don’t bulk up calories in your body and thus cut your chances of cardiac problems. While adhering to vegan diet regime, the renowned celeb incorporated bountiful plant based foods such as fruits, veggies, oatmeal, soy, whole grains, whole wheat pasta, non dairy products, yogurt etc. in his diet. Submitting to vegan diet doesn’t mean that he doesn’t cherish his favorite foods. He certainly does relish his adored healthy foods in restaurants, but makes sure that they are clean foods.

The legendary star indeed has countless fans looking up to him to reveal his secrets of sculpted physique. Here is one healthy recommendation for his fans. While picking up your workouts, prefer executing high intensity workouts. In today’s context, when our routine has grown so busy, the relevance of high intensity workouts has become even more imperative. Make a circuit while inculcating four to five exercises such as 20 reps of full barbell squats, 20 reps of reverse barbell lunges, 12 reps of military press, and 15 reps of dumbbell chest press. Without rest (in between exercises in 1 set), complete three to four sets of circuits.

Such high intensity weight training coupled with cardio workouts are bound to speed up your weight loss process. High intensity workouts practiced five times in a week will have you see dramatic improvements in your body and mood. Dedicate two complete days to rest. You can also opt to engage you in recreational activities such as skiing, swimming, hiking etc. along with your pals. Apart from getting great outing, your body will also get superb workout through these activities.