Building a Warrior Mindset: Joel Edgerton tells it like it is on Fighting your way through Obstacles 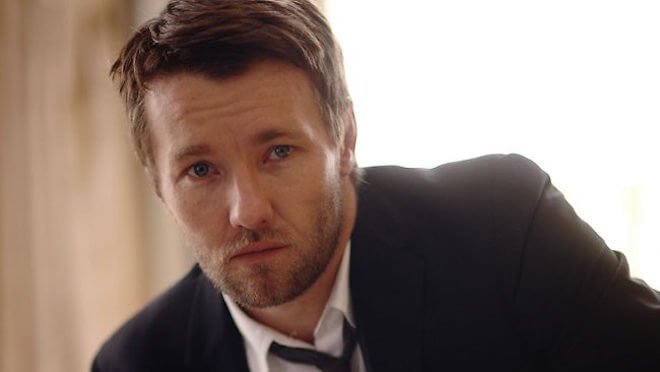 There are larger than life movie stars who beckon our awe every time we see them on the big screen and then there are actors, pure and simple. They thrive creatively, outside the glamour rather than in it. Committed to their craft and hungry for greater versatility, they drench the characters they play in absolute realism. Joel Edgerton, an actor, producer, director and screenwriter likes to believe, he is one of them.

Most popularly known for his roles in Warrior (2011), Zero Dark Thirty (2012), The Great Gatsby (2013) and Exodus: Gods and Kings (2014); Joel Edgerton has never really witnessed rapid or even a steady incline of success. Rather, he attributes his growth to an equal number of hits and misses, lulls and upheavals, which has only contributed to make him more resilient and more methodical.

“The sum total of all my stop-starts have made me less concerned about the future. I’m just aware now that I’ll always land on my feet somehow.”

Fight for the life of your dreams.

People rarely walk a simple path from point A to B to fulfill their aspirations. Rather, it is a haphazard journey where you stagger back and forth making difficult decisions, trying to maintain a happy balance in life while you are at it. It is definitely a worthy struggle and a lot more satisfying than giving in to an aimless flow of passing time. Even when Joel Edgerton seems to have it all, there is always a lurking threat to take it all away. Probably that is what wires him to be a warrior in real life.

When it comes to surviving as an actor, he says,

“It’s tricky. I’ve never been standing at the top of the tree with tons of money thrown at me. I’ve never really had a profile. So in a way I have this ‘nothing to lose’ attitude.”

If he had to describe himself in the simplest possible way, he says, “Work, friendship and self-improvement, that’s me.”

Do the best you can, until you know better.

Often, great opportunities knock on the door when you are not feeling your best. It is up to you to break through the confines of your limiting circumstances. When Sir Ridley Scott approached Joel with the opportunity of a lifetime to play Rameses opposite Christian Bale in Exodus: Gods and Kings, he was writhing in emotional defeat owing to the recent break-up of his engagement.

After years of struggle as exhausted as he was feeling, he decided to pick himself up together and went for it not wanting to undermine his former struggle. When you love your job, your passion makes you last way longer than your endurance. 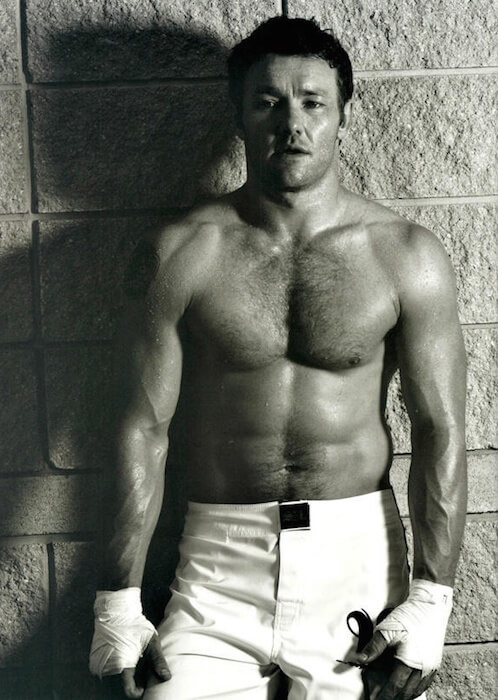 An unwavering mind grows stronger within a strong body.

Speaking of endurance, at the age of 41, Joel’s fitness has only grown even more valuable for him. He affirms that, “It feels good to be fit and strong.” Fitness with age and maturity has put him at greater ease with circumstances, he cannot control and take greater creative risks while rising above the anxiety associated with it. In 2014, he wrote, produced and co-starred in the critically acclaimed crime drama, Felony, continuing to forge ground in all aspects of moviemaking. 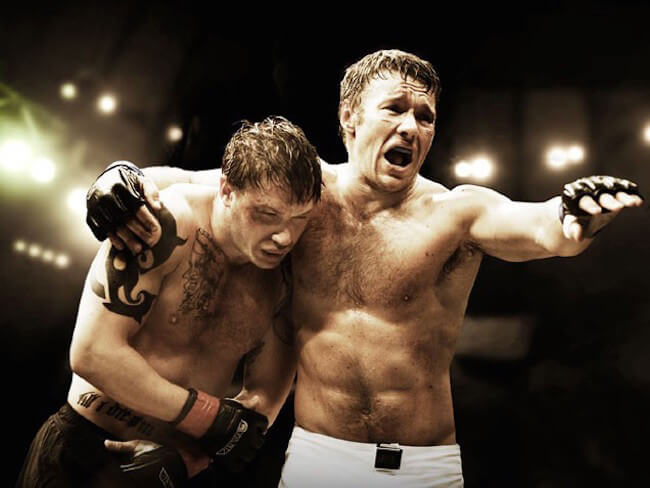 The struggle to turn into a Warrior: Winning a great role and then almost losing it.

“One of the great privileges, being an actor, is that someone pays you and sends you off to learn about something that otherwise you’d never know about. Every job leaves its residue, a bit of extra knowledge, a new skill-set.”

Just when Joel was going through a period of unemployment wondering if he will ever manage to bag another good project, he stumbled into Gavin O’Connor. The director of Warrior was looking for an actor who had the personality of an underdog, carried no baggage of a preconceived public image and was crazy enough to train like an MMA fighter for months to come.

In his late thirties, Edgerton willingly took the plunge to take up vigorous training in the gym for the first time in his life. His body, however, could not handle it. Right after week one of filming, he tore a ligament in his right knee and it seemed this opportunity would slip away as unexpectedly as it arrived. Determined to recover as soon as possible, following six weeks of rehabilitation, he was back on the sets. This time only to hit fellow co-star, Kurt Angle, in the arm so hard that he feared he fractured his elbow, putting his role in jeopardy.

Hustling through injuries, Joel found himself training in the gym 5-6 hours a day, five days a week continuously for over two months. As grueling as that sounds, he claims that was the ‘easy’ part. The hard part being, force-feeding oneself several times a day, a diet of steamed chicken and broccoli with protein shakes and nothing else to go with it. The extreme diet turned out to be a huge emotional challenge, as Joel found himself struggling to retain his nerves.

No wonder, the fear of suffering long lasting damage was so real that it palpitated with the urgency to survive throughout the movie and clearly visible in Joel’s performance. Catch a glimpse of it in the following trailer.

After wrapping up Warrior, he swears by the mental benefits of rigorous and varied physical training and lifting.

“There was a sense of pride that came with it. I felt good about myself: strong and capable.”

However, he categorically disapproves of restrictive diets and loves the freedom to eat whatever he wants. 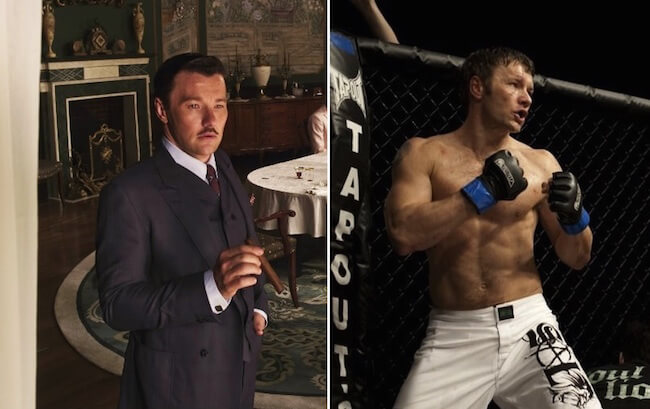 Post ‘Warrior,’ Joel realized that investing time in fitness is important, but variety and consistency hold a higher priority for him over the intensity and length of each workout.

For Cardio: He swims, surfs, runs on the beach in the sand or goes for a long ride on a bicycle. Occasionally, he goes for rock climbing and often trains at the Krav Maga Worldwide center in LA with the Warrior director, Gavin O’Connor.

For Strength: Olympic rings and a bunch of kettlebells in both his homes in LA and Sydney, alongside bodyweight resistance are enough props to help him work the muscles of his entire body. In an interview to Men’s Health magazine, Edgerton revealed that his workouts are often HIIT style circuits, prescribed by Matt Spooner, head coach at UFC gym in Sydney.

Perform four rounds. The above workout might look deceptively simple, but will leave you gasping for breath in the very first round.

For Flexibility: Joel has battled grave injuries all his life. At the age of 26, an innocent somersault on the beach of Thailand right at the eve of year 2000 accidentally caused him to bulge a disc in his neck paralyzing his left arm for six months. What a horrible start to the millennium!

His doctor recommended an Osteopath and Pilates. It has been fifteen years and many injuries have followed, but Edgerton has not ceased to endorse Pilates as the go-to means for DIY corrective physical rehabilitation. As quoted in his Men’s Health interview,

“There’s a perception that it’s not very masculine, but it’s actually one of the most difficult and excellent regimes I have ever done.”

Those willing to find out how Pilates fires your core muscles to strengthen your abs and back, may try out the following ten minute floor routine by Sean Vigue.

Tony Horton, the creator of P90X has also incorporated five Pilates moves in his program as well for that coveted six-pack.

The one exercise that is a permanent part of Joel’s workouts: Turkish Get-up

Edgerton picked up this move while training for Warrior. Commonly performed in MMA gyms, the mainstream gym-going crowd is unaware of the host of corrective benefits, this one exercise provides. Despite being a strength move, it promotes greater mobility in the hips and shoulders and leads to improved stability in both the lower and upper body. 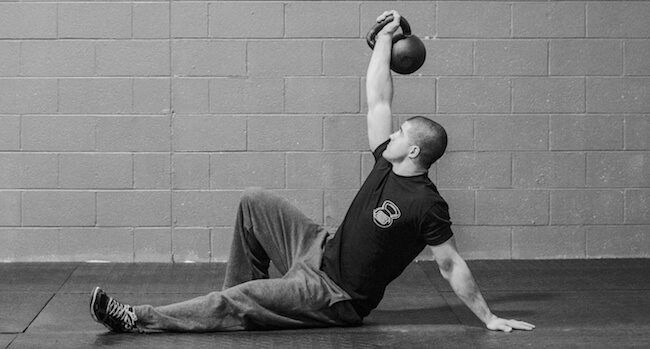 When facing a serious time-crunch, Joel performs the Turkish Get-up for fifteen minutes and he is done for the day!