Florence Welch is an English singer, songwriter, and musician who has been the lead vocalist and primary songwriter of the indie rock band Florence and the Machine, with which she has released several albums extended plays, and tracks like How Big, How Blue, How Beautiful, Lungs, Ceremonials, High as Hope, A Lot of Love. A Lot of Blood, You’ve Got the Love, Rabbit Heart (Raise It Up), Never Let Me Go, Spectrum (Say My Name), Wish That You Were Here, Sky Full of Song, and Hunger. The band’s debut studio album, Lungs, topped the UK Albums Chart after charting for 28 consecutive weeks and won the BRIT Award for “Best British Album”.

Flo, Flossy (her dad calls her by that name), Floaty

Florence attended Camberwell College of Arts but dropped out to focus on her music career. Initially, she had planned to drop for a year and see if music would be a fit for her as a career. Because she did well with music, Florence never joined the college.

Florence also has 2 half-brothers and 1 half-sister.

She is of English, Scottish, Irish, Scots-Irish/Northern Irish, Ashkenazi Jewish, and Lithuanian descent.

She is naturally a “Brunette.”

But likes to dye her hair ‘Red.’ 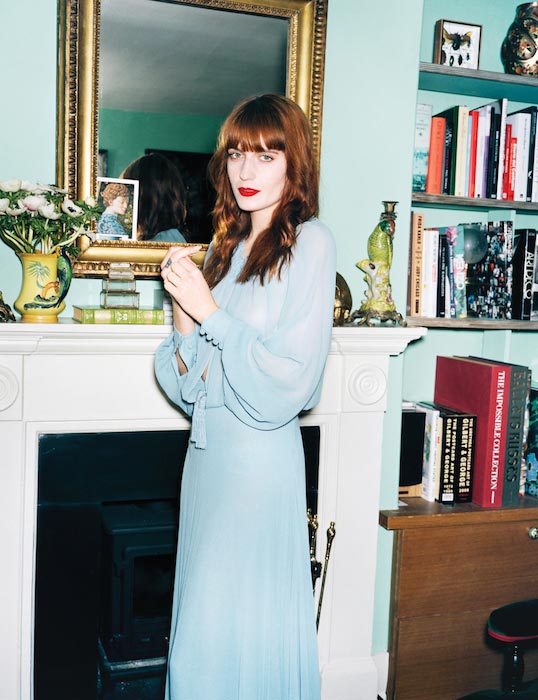 She has appeared in Dominic Jones Jewellery commercial.

But, she shows her interest in religion by using words like “Jesus” and others in her songs. She does not practice any religion.

Being the lead vocalist of the indie rock band Florence + the Machine.

Florence first released the album Lungs under her band “Florence and the Machine” on July 3, 2009, through Island Records.

The album was certified as 5x Platinum in Britain.

As an actress, she appeared in the 2016 drama musical film Weightless.

In July 2012, Florence had to cut all the caffeinated drinks because of her vocal illness. She was advised by her doctor to drink herbal tea instead. It was really difficult for her to stop having coffee, tea, or even diet cokes, all of a sudden. She had a habit of drinking 2 coffees in the morning and 5 diet cokes in a day.

She eats for energy such as almonds which are full of protein and fiber and keeps you satiated for a longer time. Tuna is another low fat and high protein source.

She also munches on Pirate’s Booty clocks – 7 pieces at a time which are approx 10 calories at a time.

Because she is touring most of the time, her performances and gigs serve as her workout. Dancing and singing form a good cardio workout plus dancing is her all-time favorite thing too. It demands a lot of energy, so she tries to keep herself full of energy with the right choice of food.