Gemma Atkinson is an English influencer, actor, radio presenter, dancer, and former glamour model who is known for playing Lisa Hunter in the soap opera Hollyoaks and in 3 spin-off series – Hollyoaks: After Hours (2004), Hollyoaks: Let Loose (2005) and Hollyoaks: In the City (2006). She has also been cast in many other shows such as Emmerdale, I’m a Celebrity…Get Me Out of Here!, Soapstar Superstar, The Bill, Waterloo Road, Casualty, The Real Hustle, The Hamster Wheel, Law & Order: UK, Strictly Come Dancing, and Glow Up: Britain’s Next Make-Up Star. In addition to that, Gemma Atkinson’s film credits include Boogie Woogie, 13Hrs, Devil’s Pass, Fever, Baseline, The Sweet Shop, How to Stop Being a Loser, The Confusion of Tongues, Airborne, Night of the Living 3D Dead, and Cain Hill.

Gemma, Thunder Thighs (She got this nickname from her school friends)

She attended and took her GCSEs at Batley Grammar School on Carlinghow Hill in Upper Batley, West Yorkshire.

She has also done a course in nutrition and also wanted to study sports therapy at the university. 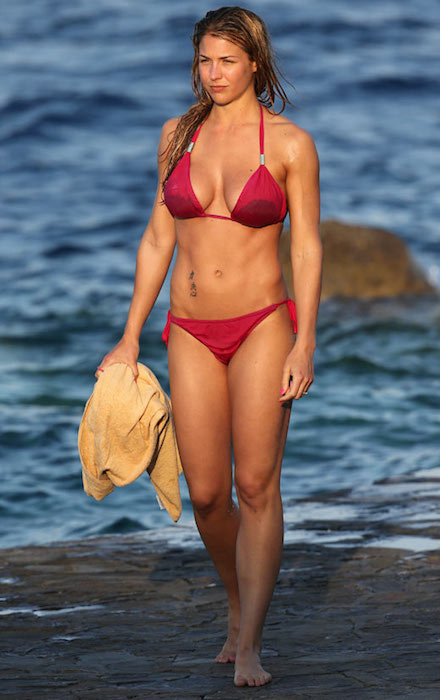 She had served as the female face of the 2007 British Grand Prix.

Gemma is also the face of USA Pro.

She is famously a lingerie model and has modeled for several brands like La Senza, Ultimo’s D-G range, and many others.

Gemma has appeared in a Striptease commercial and numerous others.

Portraying Lisa Hunter in the Channel 4 soap opera Hollyoaks from 2001 to 2005. She appeared in a total of 631 episodes.

She played the role of Charlotte Bailey in the 2009 comedy film Boogie Woogie.

Gemma is an enormous fitness lover and she does exercises daily by going to the gym and also goes for boxing classes two times a week.

She also knows Muay Thai, which is a combat sport in Thailand.

She works out 4 days a week with weight training, and two days are reserved for HIIT and core workouts. Her single workout session lasts for one hour. She puts special focus on her legs to make them strong and tone them.

Gemma drinks 3 liters of water in a day (but never drinks fizzy drinks; though she boozes on special occasions) and takes care of her skin by not wearing heavy makeup, when not required. In general, she wears it at events, parties, and at work.

She does not eat red meat, and fish and chicken are the only meat, she eats. Gemma does not diet and believes in eating everything but in moderation. Every week, she keeps one cheat day (On that day, she eats whatever she wants).

She keeps snacking throughout the day to keep her energy levels up. She eats snacks like nuts, two pieces of dark chocolate, banana, or oatcakes in between her meals.