Hilary Duff is an American actress, businesswoman, singer-songwriter, producer, voiceover artist, and writer who gained popularity by playing the role of Lizzie McGuire in The Lizzie McGuire Movie as well as the show Lizzie McGuire. She is also known for her roles in shows and movies such as Younger, A Cinderella Story, According to Greta, Cheaper by the Dozen, Cheaper by the Dozen 2, Beauty & the Briefcase, The Haunting of Sharon Tate, Flock of Dudes, Gossip Girl, and The Real Girl’s Kitchen. In addition to that, she has also branched out as a musician and has released albums and tracks such as Santa Claus Lane, Metamorphosis, Breathe In. Breathe Out., Our Lips Are Sealed (with Haylie Duff), Someone’s Watching Over Me, So Yesterday, All About You, and Sparks. 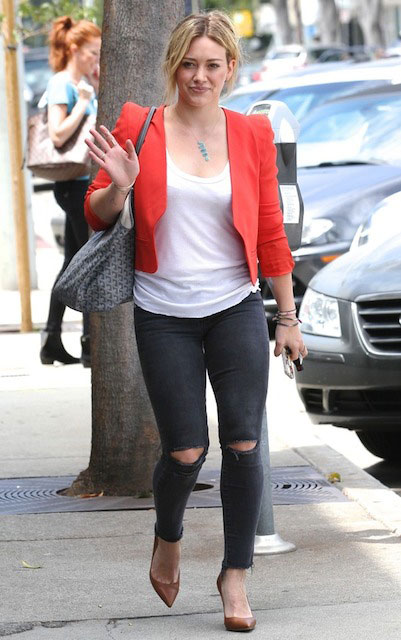 Due to her involvement in acting and show business from an early age, she didn’t go to school due to a lack of time. So, she had been homeschooled from the age of 8.

Duff has dated many male personalities. The list is as follows –

She is of German, English, Scottish, Scots-Irish/Northern Irish, Welsh, French, and Polish descent.

She has dyed them in other shades such as brown, aquamarine blue, etc.

Working as an actress and singer too. She is identified by her role in the Disney Channel Original series Lizzie McGuire from 2001 to 2004. She did her role as Elizabeth Brooke McGuire.

She debuted in the music industry with her first studio album – Santa Claus Lane, released on October 15, 2002, under the label Buena Vista. It charted at number 154 in the US charts (Billboard 200) and at 134 in Japanese charts (Oricon). In the US only, it was able to sell 477,000 copies. The album consists of 11 singles with a total length of 36:41 minutes.

1998 film Casper Meets Wendy was Duff’s debut movie. It was a direct-to-video film and the prequel of the 1995 film Casper. She did the role in her debut movie as Wendy. She was nominated for the “Young Artist Award for Best Performance in a TV Movie”.

In 1997, she got the chance to appear in the TV series True Women, which is a mini-series. However, her role in the show is uncredited. The show is based on the 1993 novel by Janice Woods Windle.

Harley Pasternak is the trainer, from whom she takes help. She likes circuit training as it assists her to lose weight in a short span of time. In-circuit training, one goes for a series of exercises after a quick warm-up session. She performs lower body, upper body, and other exercises. Her trainer insists on total body workout/fitness. She executes deadlifts and many other exercises to achieve the desired body.

Diet has a considerable role in keeping one’s body in shape and Duff knows what to eat. She likes healthy food like salad, fish, and egg white omelet.

“I love clothes. I can’t control myself. I have a huge fetish for shoes and clothes and make-up. I’m the kind of person who doesn’t like to wear things over and over again.”