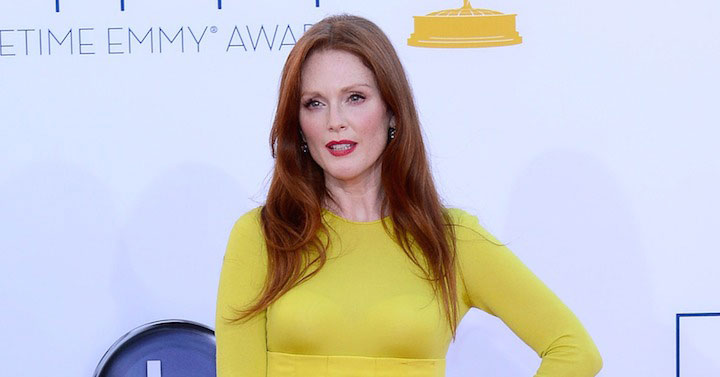 Red headed, phenomenal beauty, Julianne Moore is an American actress and children’s author. Having started her acting career in 90s, the stunning actress has been nominated four times for an Oscar for her incredible roles. Boogie Nights, The End of the Affair, Far From Heaven, Children of Men are some of the blockbuster movies of Julianne.

Lately she appeared in the movie, Non Stop, which is a mystery thriller, and she looked totally ravishing in the movie. Despite crossing fifty, the exquisite beauty looks more than two decades younger to her age. Her youthful charm and radiant glow is simply inexplicable. As children author too, the illustrious actress is not behind any proficient writer. Her writing career is as shinning as is her acting career. Married to Bart Freundlich since 2003, Julianne has magnificently been playing the role of a doting mother, caring wife, and a working woman.

Having been through ample ups and downs in life, Julianne also shares the time when she was in utter emotional turmoil. It was past the death of her mom, which totally devastated her. She grew victim of depression, insomnia and myriad other ailments. To get her life back on track, Julianne succumbed to acupressure, which not only provided her relief from back pain, but also cured insomnia and other health issues. When it comes to maintaining her lean and curvaceous figure, the brunette attributes her meticulous diet and exercises for her svelte figure.

Julianne has been loyal to workouts from her younger days, and it probably is her uniformity with workouts that she still owns hot and sexy figure. The mommy of two children has been sticking to yoga since very long time. She practice ashtanga yoga and several other postures of yoga, which invariably have made her body supple. Since aging is directly proportional to stiffness, which further makes your body likely to being hurt, yoga keeps Julianne hale and safe.

She practices yoga thrice in a week. Apart from that, the stunner has lately switched to strength training. She executes various exercises to magnify the number of lean muscles in her body. She has reserved two days for strength training and shares of not being able to consistently execute workouts for longer duration because intense workouts have her get painful hips. However, Julianne tries to maintain regularity in her workouts and she keeps challenging her to new levels of workouts. Among recreational activities, the bombshell adores paddleboarding and thoroughly enjoys the water sport.

Julianne is one of the celebs who are very discreet about their diet. Not only does she herself consumes nutrient dense foods, but also has her children eat healthy and nutritious foods. Her method of inculcating healthy eating habits in her children was to allow them to eat whatever they wished in moderation and the trick worked because they themselves don’t feel tempted to consume unwholesome foods. In addition to that, she steers clear from processed foods and prefers cooking foods at home. She contends, when you cook foods at home, you know what ingredients you are using in the foods, and what would be their possible impacts, which surely are far better than consumption of pre-packaged foods having harmful additives and preservatives added in them.

She incorporates copious healthy foods such as lean fish, eggs, green veggies, fruits etc. in her diet. And she naturally stays away from sinister food items such as dairy products, sugary foods, and alcohol. Besides that, to rid her body from toxins, she swears by detox diet such as juice diet program, specifically when she has to revitalize her skin and body and make them look awesome prior to attending some event.

She shares, not only does juice diet invigorates her skin and body, but it also makes her body more limber and elegant. Her wrinkle free, flawless skin and sculpted hot bod are the testimonies of regulated diet consumed by her. Julianne also abides by healthy lifestyle and seldom has her dinner past five in the evening.

Do you aspire to have sizzling hot sylphlike figure like Julianne Moore? Here comes one recommendation for the fans, who wish to make their exercises more gratifying. You can really stimulate fat burning process, should you develop the habit of eating high protein foods half or one hour prior to workouts. Research data braces the fact that people who perform their workouts after feeding protein rich snacks to their bodies scorch far higher calories than those who perform workouts with empty stomach.

Since your body needs calories to gain energy, in the lack of calories, your body begins drawing energy by burning muscles, which works against your fitness objective. You can have light protein foods such as Greek yogurt, egg whites, protein smoothie etc. in your snacks, and torch numerous unsolicited calories from your body.