Katie Holmes is an American actor, voiceover artist, director, model, and producer. She is known for her roles like Joey Potter in the teen drama series Dawson’s Creek, Rachel Wagner in the teen science fiction psychological horror film Disturbing Behavior, Leigh Ann Watson in the black comedy film Teaching Mrs. Tingle, Jacqueline Kennedy in The Kennedys and The Kennedys: After Camelot, Heather Holloway in the satirical black comedy film Thank You for Smoking, Kim in the horror film Don’t Be Afraid of the Dark, Erin Sadelstein in the comedy film Jack and Jill, Bobbie Jo Logan Chapman in the heist comedy film Logan Lucky, April Burns in the comedy-drama film Pieces of April, Pamela “Pam” McFadden in the neo-noir thriller film Phone Booth, Paige Finney in the crime drama series Ray Donovan, and Rachel Dawes in the superhero film Batman Begins.

She attended and graduated from Notre Dame Academy in Toledo, where she was a Grade A student.

She scored 1310 marks out of 1600 in SAT (Scholastic Assessment Test) and so was accepted into Columbia University. She attended a summer session and then dropped out as she got the role in the TV series Dawson’s Creek.

She learned acting and modeling at Margaret O’Brien’s Charm School in Toledo.

Katie Holmes has been signed with –

According to CelebrityNetWorth.com, her net worth was $25 Million in 2020.

Katie Holmes is of German, Irish, and English descent. 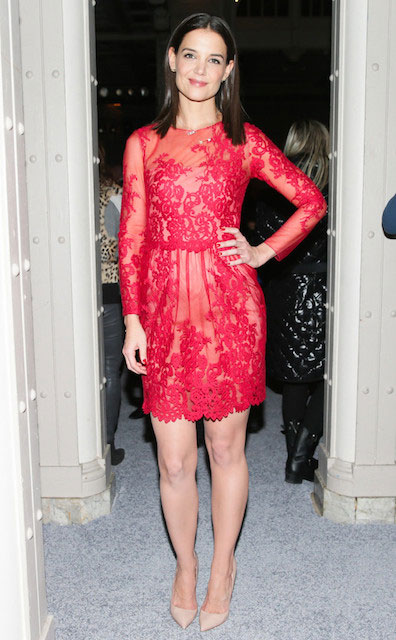 Her first professional role and film debut happened with the 1997 drama film The Ice Storm for her role as Libbets Casey.

From 1998 to 2003, she appeared in The WB’s teen drama series Dawson’s Creek for her role as Joey Potter.

She follows the Paleo diet plan and eats mostly healthy. To shed her post-baby weight also in 2006, she ate healthily, did breastfeeding (also helps to lose weight), and underwent a 30-day detox plan to clean her body from inside.

She does a variety of exercises like Pilates, Bikram yoga, cycling, running, etc. Get to know her workout routine and diet plan.