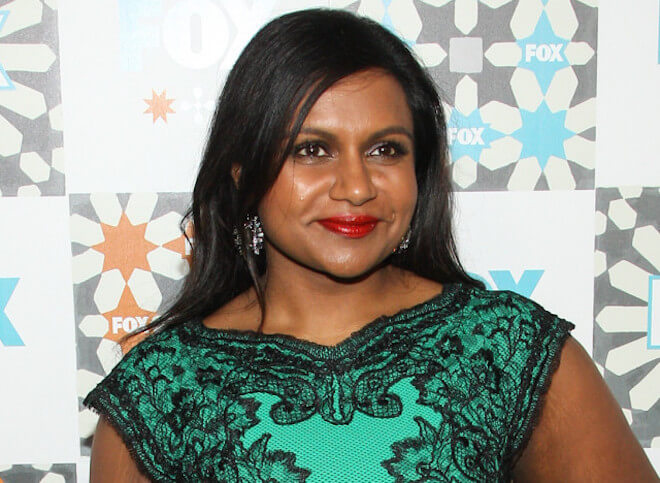 There are some women who are not afraid to speak up their mind on-screen and Vera Mindy Chokalingam, (Oops!!) Mindy Kaling is one of them. She rose to fame with the Fox and Hulu sitcom The Mindy Project (2012-Present), and the NBC sitcom The Office (2005-2013). She has always been demonstrative of her workout and diet details via Instagram and various interviews. So here, we have compiled a brief article on how the funny lady remains fit and what does she thinks of her health.

Mindy tries to motivate herself to work out by devising weird methodologies. In 2013, she devised a plan in which she went to work in workout clothes so that she can’t avoid an exercise session after work. Hmm…it’s an interesting option for people who work in back-end jobs where they are free to wear whatever they wish to work. Would you try it?

Another motivation technique was shared by the actress, which is also a bit weird. NYMAG reported that when she runs, she pretends that she is an actress living in L.A. who has to look stunning at all times. Sometimes, she assumes that Michael Fassbender is her husband and she is avenging his murder by a Nazi.

While talking to PopSugar, the TV star admitted that she is in a state of constant self-improvement, but she does not take any stress about it.

The executive producer also shared her workout routine which involves barre classes with light weights and lots of reps. Mindy termed the barre classes as “painful, pretty Pop Physique lifestyle.” The workout routine also includes getting down to a nine-minute mile and going on a hike with friends. She also likes doing jogging, strength training and yoga exercises to remain fit. Last but not the least, she stays active 5 days a week that helps her body to stay agile.

The director likes to create healthy recipes in her kitchen and takes help from cookbooks like “It’s All Good” by Gwyneth Paltrow. She also likes consuming nutrient-rich green juice from Pressed Juicery. The juices she likes having are filled with health-friendly ingredients like ginger, lemon, cucumber, kale, and spinach. All of them help a person to detox and build up an immunity backup, which is really good, we must say.

Whenever Kaling parties hard with friends, she likes to pay up for it by increasing the stakes at her workout routine. Well, that’s fair…Don’t you think?

Be Happy With Who You Are

Mindy also motivates people to “be happy with who they are.” She knows that she is not skinny and she may never be skinny, but she is completely okay with that.

Don’t Be Too Serious

The TV celebrity believes in eating quite healthy, but she also never regrets enjoying the occasional cookie. She also suggests that we should never compare ourselves with others as it will only make us sad. Rather, we should all be happy with who we are and try to be a happy person.

Fast food makes sense for this writer after long hours. She is very fond of healthy options offered by McDonald’s such as salads and apple slices. She also makes sense to herself of fast food by seeing the food (not eating, just seeing) to content her cravings. Mindy further explained that she often eats at McDonald’s about twice a week as she didn’t get to enjoy delicacies like McNuggets when she was growing up. When asked about the unhealthy habit, she stated that she does not have to live until she’s 80. We must say that her fans should skip over this advice of Mindy as it’s not very sensible, health-wise.

Recently, Umami Burger’s Artist Series added the Mindy Burger to its menu. She shared her happiness with the development by saying that she was honored and the burger is spicy and cheesy just like her own personality. A portion of proceeds earned from the sales of Mindy Burger will benefit the Pancreatic Cancer Action Network which is done in memory of Kaling’s mother who passed away from the same disease in 2012. A good deed indeed!!!

The beauty is keeping up her dedication to staying fit in 2018 by using different exercise routine and diet secrets. Her strategies seem to be working because she looks awesome as a yummy mummy. Yes, she gave birth to a daughter in December 2017 and is looking as fit as ever. How is she doing it? Let’s find out.

Working Out is Therapy

The star admits that working out makes her feel a lot better than any other therapy because of the endorphins which are released after a workout session. She thinks working out is a great way to boost one’s mental health and have some “me time”.

The diva is doing three different types of exercises. She works out for at least four or five times a week if she is not shooting. She likes to mix up her workouts.

On one day, she prefers to stick to a SoulCycle class, on the next day, she does strength training with her trainer. She also makes time for yoga at least once a week. Yoga is a way for Mindy to get back to her roots (as she is an Indian) but she admits that she is not so good at it. She is also trying VersaClimber (a cardio fitness machine) these days.

This time during her pregnancy, she decided not to gain too much and could successfully restrict her weight gain to 27 pounds (by exercising) which according to her doctor is easy to shed off post-pregnancy.

During pregnancy, she exercised whenever it was possible and did a lot of walking, jogging, and yoga. In fact, she even exercised on the day she gave birth to her daughter. About a week after the little princess was born, she walked for a couple of miles to stay fit. All these things helped her to lose pregnancy weight easily.

Kaling believes in the saying that “food is life.” She likes every type of food, be it sushi or French, spicy or sweet and even Ethiopian food. Though as a kid, she was taught to clean her plate, she has learned otherwise now. She doesn’t eat everything on her plate now. Her latest strategy is to order everything she likes and eat only half of it.

This is What Mindy Kaling Eats in a Day

The actress says that she has learned to appreciate little moments more and it has made her a happier person. Her life has also changed with the arrival of her daughter as she has to spend so much time with the little bundle of joy like feeing her after every three hours. So, whenever she gets a chance to leave the house, she considers the escape to be “little jaunts out of the house.”

Inspiring Her Daughter for Fitness

The Mindy Project (2012-2017) actress says that she wants her daughter to see her working out and realize that exercise is a part of her mother’s life. Mindy wasn’t taught such things as a child and didn’t start working out until she was 24 years old.

She doesn’t want the same for her daughter but wants her daughter, Katherine to learn the importance of fitness from an early age. Mindy also wants her daughter to be self-confident by motivating her and not being stingy in offering encouraging comments to her from a small age.

The TV personality is also open to trying new methods of fitness.

In March 2018, her trainer, Jeanette Jenkins shared a video to her Instagram page where the actress was walking on the treadmill while simultaneously pumping some iron. She had dumbbells in each hand and looked at ease doing this tough exercise.

According to experts, when you add cardio and weights together, you end up making the workout more intense because you are using additional muscles to complete every movement.