Ellie Kemper is an American actress and comedian who is best known for portraying roles such as Erin Hannon in The Office, Becca in Bridesmaids, Ms. Griggs in 21 Jump Street, Kimmy Schmidt in Unbreakable Kimmy Schmidt, and Pam McKenzie in Home Sweet Home Alone. She has also appeared in a variety of other TV shows and films such as Mystery Team, Identity Thief, The Stand In, NTSF:SD:SUV::, Robot Chicken, The Mindy Project, Sofia the First, American Dad!, WordGirl, At Home with Amy Sedaris, All Hail King Julien, and many more. For her acting skills, she has been honored with several awards such as the Golden Nymph Award, MTV Movie Award, and Webby Award.

Ellie, Smelly Ellie (Her family calls her by this name)

She also attended the University of Oxford for a year to study English.

Ellie has a total of three siblings including Carrie. Ellie is the second out of four children.

She has English, Italian (due to her maternal grandfather), and German ancestry. 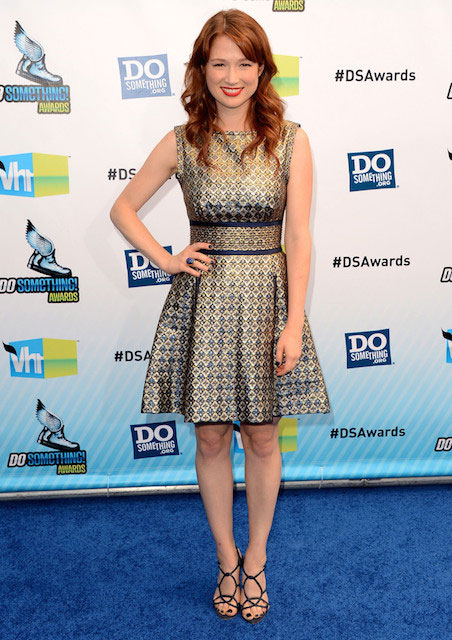 She has appeared in many commercials for Apple’s iPhone, Garnier, Kmart, and others.

Playing Kelly Erin Hannon / Erin Hannon in the comedy series The Office from 2009 to 2013.

Ellie appeared in the 2009 movie Mystery Team for her role as Jamie.

The film is created by the comedy group Derrick Comedy.

In 2006, Kemper made her appearance on the TV series S*xual Intercourse: American Style for her role as Cindy. She appeared in a total of 2 episodes.

She likes to go to SoulCycle classes for the workout. Ellie also goes for a spinning workout.