Kyrie Irving is an American professional basketball player who played college basketball for the Duke Blue Devils and later went on to play for the Brooklyn Nets of the National Basketball Association (NBA). After being selected by the Cleveland Cavaliers with the first overall pick in the 2011 NBA draft, he was named the Rookie of the Year as well as won an NBA championship with the Cavaliers. He has also played for the United States national team, winning gold at the 2014 FIBA Basketball World Cup and the 2016 Summer Olympics. Kyrie Irving was elected vice-president of the National Basketball Players Association in February 2020. Additionally, he has worked on shows and movies like We Bare Bears, Family Guy, Kickin’ It, and Uncle Drew. 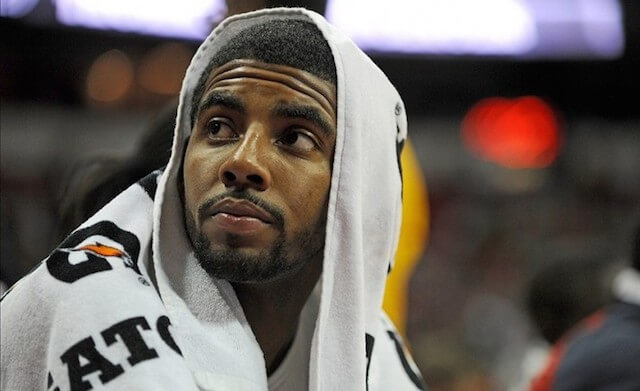 Kyrie first enrolled himself in Montclair Kimberley Academy in Montclair, New Jersey, where he played during his freshman and sophomore years. However, because he wanted to experience a bigger challenge playing basketball, he left Montclair and continued his education at St. Patrick High School in Elizabeth, New Jersey.

After graduating from high school, Irving attended Duke University. He didn’t graduate and after only 1 year, left Duke, so that he can take part in the 2011 NBA Draft.

Kyrie Irving has been signed with –

His net worth has been $90 Million according to CelebrityNetWorth.com.

You may want to check some of his best commercials –

Kyrie is well known for his tremendous on-court skills such as ball-handling, variety of finishes, and high IQ, and that’s why, he is considered to be one of the top NBA point guards, who has ever played the game of basketball.

Kyrie was NBA Rookie of the Year in 2012 and an NBA All-Star Game MVP in 2014. Maybe the biggest achievement in Kyrie’s career by now is the gold medal and the MVP award of the tournament that he won in the 2014 FIBA Basketball World Cup in Spain with the National Basketball Team of United States.

In 2011, Kyrie appeared in the weekly ESPN talk show Rome Is Burning as himself – Alone with Rome / Duke point guard in just a single episode, broadcast on May 26, 2011.

Irving is probably the most skilled point guard alongside Stephen Curry in the last few years. His versatility on the court is what makes everyone wonder, how someone can be so skillful with the ball. His shooting ability is so smooth, which speaks for the fact that he won the NBA three-point shootout in 2013. He made the biggest improvement when he trained with one of the best basketball skill trainers in the world, Micah Lancaster, and his company I’m Possible Training.