Leighton Meester is an American actress, theatre artist, singer, songwriter, voiceover artist, and model who is best known for playing the role of Blair Waldorf, the Queen Bee of Constance Billard and a devious socialite, in the teen drama television series, Gossip Girl, from 2007 to 2012. Apart from that, she is also known for her on-screen roles like Deborah Revere in Making History, Angie D’Amato in Single Parents, Savannah Barnett in Surface, Rebecca Evans in The Roommate, Eleanor Logan in Like Sunday, Like Rain, Jaynie Hansen in Killer Movie, Nina Ostroff in The Oranges, Sasha Weiss in Life Partners, Samantha “Sam” Willows in The Haunting of Sorority Row, and Carrie Bishop in Veronica Mars. 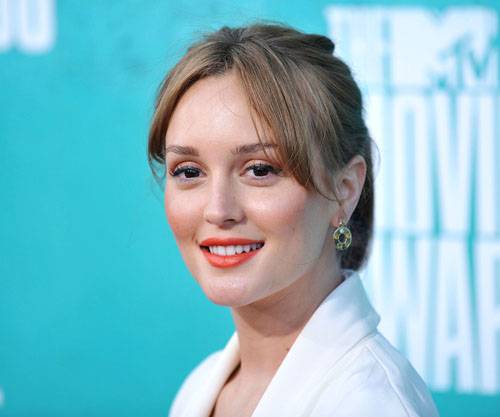 Meester attended the Professional Children’s School in New York City, New York. At 14, after moving to Los Angeles in California, she went to Hollywood High School and Beverly Hills High School. She then transferred to a small private school and graduated a year early.

She has been signed with Wilhelmina Models.

She is of German, Dutch, English, Irish, Scottish, and Welsh descent.

She is a natural blonde but dyes her hair brown.

She has done advertisements for Tamagotchi toys and Clearasil.

She became the brand ambassador for Biotherm Skincare in 2013.

In 2008, she served as the spokesperson for Sunsilk.

In 2009, she appeared in an advertisement for Reebok’s Top-Down sneakers.

She has endorsed ASK Enquired (a Korean clothing line).

She released her debut studio album, Heartstrings, on October 28, 2014.

2003 film The Big Wide World of Carl Laemke for her role as Tanni.

She appeared in the episode titled “Disciple” in the American police procedural and legal drama television series Law & Order for her role as Alyssa Turner.

Justin Falahi is the personal trainer of Leighton Meester.

There are a couple of things, which they do together. The first is that they don’t go to the gym. Second, they don’t count the sets or reps of the exercises they do. Third, as she is very busy in the shooting of Gossip Girl, she does not get much time to relax. So, she does a mini-meditation of around 5 minutes to relax her. See her full workout routine and diet plan.