Sarah Hyland is an American actress, voiceover artist, singer, and producer who is best known for appearing as Haley Dunphy in the ABC sitcom Modern Family, a role for which she received several accolades. She has also been cast in several other shows and movies like XOXO, Vampire Academy, Lego DC Comics Super Heroes: Justice League – Gotham City Breakout, See You in Valhalla, Cougars, Inc., Scary Movie 5, Date and Switch, The Wedding Year, Robot Chicken DC Comics Special 2: Villains in Paradise, Childrens Hospital, Randy Cunningham: 9th Grade Ninja, One Life to Live, All My Children, and Touched by an Angel. 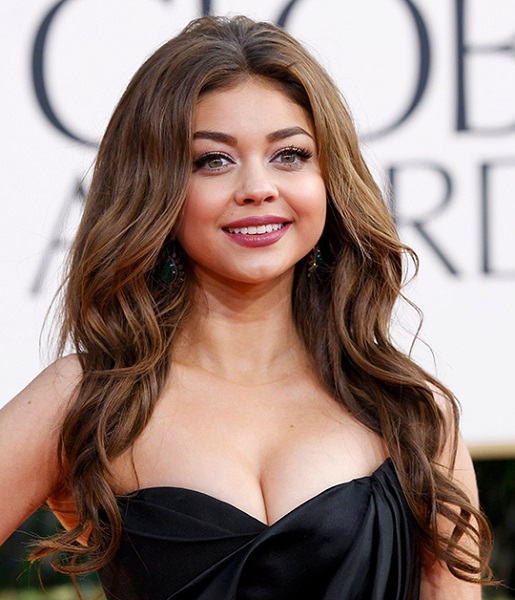 Sarah is signed with these agencies –

She dyes her hair dark brown.

She is naturally ash blonde.

She has appeared in TV commercials on Style Savvy Trendsetters, Stoplandmines.org (Public Service Announcement), Olive Garden restaurants, among many others.

In December 2020, she was seen in a Taco Bell commercial alongside Joe Keery.

Playing the role as the oldest sibling Haley Dunphy on the ABC sitcom Modern Family since 2009. For this, she bagged the 2014 Glamour Award for “Comedy Actress” and was nominated for Teen Choice Award for “Choice TV: Female Breakout Star”, Critics’ Choice Television Award for “Best Supporting Actress in a Comedy Series”, and Kids’ Choice Award for “Favorite Female TV Star – Family Show”.

She started her acting career in 1997 with the film A Tall Winter’s Tale for her role as Elizabeth.

In 1998, Sarah made a guest appearance on the British drama series Trinity for her role as “shy girl” in an episode titled “No Secrets”.

As a voice actress, she made her TV show debut by providing vocals to the character of Theresa Fowler, a Norrisville High student who is a member of the school’s baton twirling team and also has a crush on Randy, in Randy Cunningham: 9th Grade Ninja in 2012.

Sarah Hyland goes to the gym. In October 2018, she was photographed having a drink after her gym session.