Aisha Tyler is an American actress, voiceover artist, comedian, director, producer, and talk show host who is known having been cast in a variety of on-screen roles such as Dr. Tara Lewis in Criminal Minds, Dr. Charlie Wheeler in Friends, Major Jones in XIII: The Series, Marianne Taylor in 24, Andrea Marino in Ghost Whisperer, and Mother Nature in The Santa Clause 2 as well as The Santa Clause 3: The Escape Clause.

She attended McAteer High School, San Francisco. Later, Aisha graduated from Dartmouth College from where she received a degree in environmental policy.

Aisha Tyler is signed with –

She is of African-American, Malagasy, English, Scottish, and Irish descent.

In 1997, she appeared in a TV commercial on AT&T Worldnet.

Aisha is widely known as a stand-up comedienne, a lively television host in shows like Talk Soup (2001), The Talk (2011-2017). For this, she also won the Daytime Emmy Award for “Outstanding Entertainment Talk Show Host” in 2017.

She is known for appearing in television series like Ghost Whisperer, voicing Lana Kane in Archer, and in the 9th and 10th season of Friends, she appeared as Charlie Wheeler, Joey’s and then Ross’ girlfriend.

Aisha appeared in a small role (playing “Woman with Weave”) in HBO’s television film Dancing in September in 2000.

Tyler first appeared in television police drama series Nash Bridges on CBS for her guest role as a reporter.

Aisha Tyler got her noticeable role on television in the supernatural drama series on CBS’s Ghost Whisperer (first season, 2005-2006) as Andrea Marino.

Prior to this, she had also hosted the show Talk Soup in 2001 for cable network E! and Syndication’s reality dating series The Fifth Wheel (hosted from 2001 to 2002).

Aisha Tyler is famous for her curvaceous body and a magniloquent height of 6 feet. She is a yoga practitioner and does cardio on the elliptical machine. She does jogging and hiking as well.

Her fitness freakiness can be counted by the fact that she has even got up early in the morning at 3 a.m. to exercise. She takes a healthy diet rich in vegetables, but sometimes Aisha treats herself with a stint of chocolate. 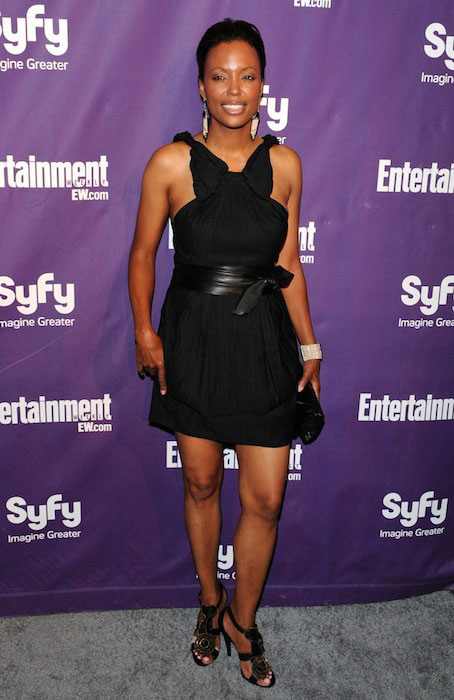