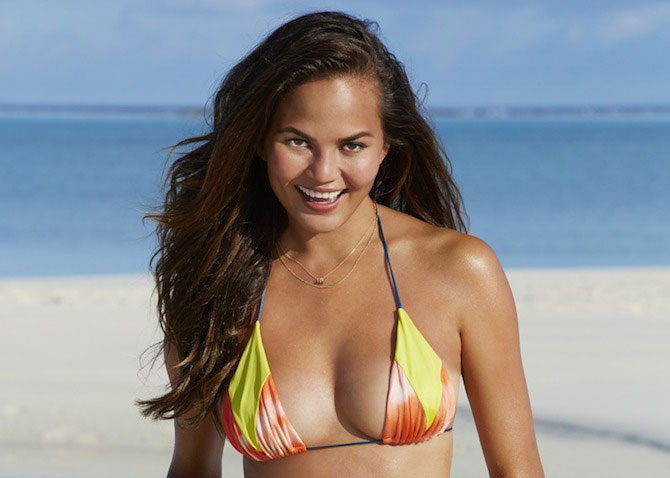 Chrissy Teigen arrested our eyes when she graced the cover page of 50th anniversary issue of Sports Illustrated’s 2014 Swimsuit Issue with her topless body along-with Nina Agdal, and Lily Aldridge. Unlike most slender and shaped up celebs and models who are very particular about their diet, Chrissy being big foodie loves to eat processed and junk foods. Let’s sneak peek in the secrets of Chrissy Teigen diet and workout routine which keep her in flawless shape.

The chick adheres to Physique 57 to tone her body. The workout pours out all the harmful toxins off her body and bestows her sleeker and curvier look. She hits the classes numerous times in a week. Instead of working out on her own, the sultry model adores exercising in a group, where she can witness other people too putting their entire energy into workouts. Moreover, group workouts give her significant platform to compete with others which actually take her out of her comfort zone.

Having heard a lot about the incredible outcomes of SoulCycle, Chrissy also tried it once. However, within twenty minutes, she got exhausted like hell. Credited with enviable posterior, Chrissy’s butts, legs, and thighs remain sleek even when she switches to slothful routine. 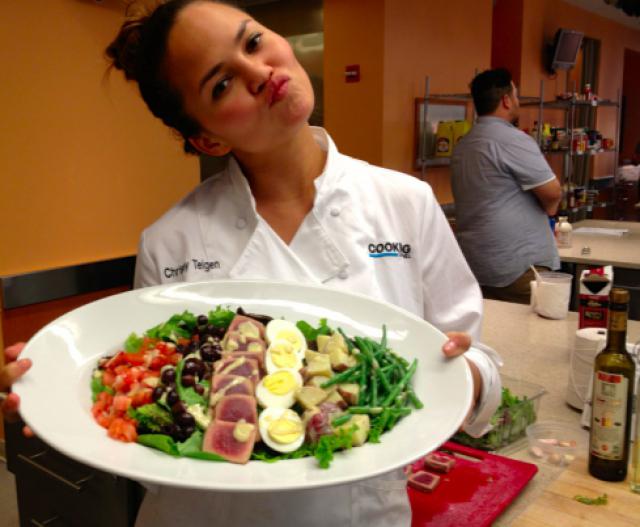 The svelte model doesn’t restrain herself most of the times and instead indulges in her beloved foods. Her affection for salty foods often has her get puffy eyes in the mornings which she treats by putting frozen eye bags under her eyes. She shares, when she endeavors to cut back the consumption of sugary foods, she feels herself more drawn to salty foods. However, when Chrissy has to hone her body for bikini shoots, she abides by very restrictive diet. She trims down the consumption of high carb, processed, junk, and other unhealthy foods.

To render adequate nourishment to her body, she specifically relies on high protein foods such as two eggs with turkey, bacon and avocados. Among beverages, she not being compatible with caffeine rich drinks steers clear from them. During the shoots, she eats fibrous salads and sashimi, and forbids eating dinner. Once the burden of being in slender and toned shape is off her, she splurges on her favorite foods like insane. 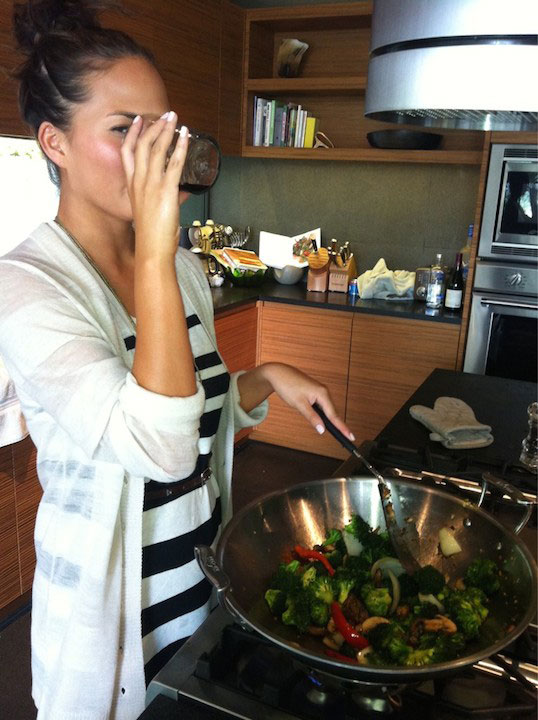 Though the brunette is hundred percent against starvation diet plan, but to de-stress her body and to strip off unsolicited pounds faster, she banks on lemonade diet. Her detox plan lasts for ten days in which she consumes three nutrient laden green smoothies, one pineapple, one cup of cashew milk, lemon juice with maple syrup and cayenne pepper. Aside from that, she consumes bountiful fruits and veggies in a day.

Here are some healthy tips for her fans who don’t wish to turn to restrictive detox diet plan like lemonade diet but still aspire to purge their bodies from toxins. Here are some excellent drinks which you can inculcate in your diet regime. Besides feeling energized, you shall also acquire taut stomach with the incorporation of these beverages.

Iced Peppermint Tea – If you are too exhausted, you can drink iced peppermint tea. Equipped with vital nutrients, the tea fosters stomach flattening process. The wonderful tea assists your body to digest even “hard to process foods” such as burger, pizza, steaks etc.

Pineapple Frappe – Credited with two belly-flattening ingredients, pineapple frappe is a powerful beverage. Pineapple being opulent in bromelain enzyme aids in the digestion of proteins by breaking it down in small pieces. Aside from that, you can double its nutrient density by adding spoonful of flaxseed oil into it. Monounsaturated fatty acid (MUFA) in flaxseed oil has proven results of rendering flat stomach.

Dark Chocolate Shake – Dark chocolate shake being endowed with appetite suppressant property shall beat your cravings and thus save you from consuming mindless snacks. However, make sure that the chocolate you use to prepare the shake is dark chocolate. And since one glass of shake contains nearly 400 calories, you can also make the beverage your breakfast food item.

Watermelon Smoothie – If you drink watermelon smoothie without adding sugar to it, it’s a marvelous low-calorie beverage. Apart from being packed with essential nutrients and water, the smoothie also contains lycopene, cancer-fighting compound and essential amino acids.