Edward Norton is an American actor and filmmaker who is best known for portraying roles such as Eric Byer in The Bourne Legacy, Henckels in The Grand Budapest Hotel, Bruce Banner / Hulk in The Incredible Hulk, Eisenheim in The Illusionist, Will Graham in Red Dragon, and Derek Vinyard in American History X. He has also appeared in a variety of other TV shows and films such as Primal Fear, Everyone Says I Love You, Fight Club, Frida, The Italian Job, After the Sunset, Kingdom of Heaven, Man from Plains, Pride and Glory, Moonrise Kingdom, Collateral Beauty, The French Dispatch, Modern Family, and many more. For his acting skills, Edward has been honored with numerous awards such as the Golden Globe Award, Screen Actors Guild Award, and Critics’ Choice Movie Award.

In 1987, Edward graduated from Wilde Lake High School in Columbia.

Further, he went to Yale University and studied History. In 1991, Norton graduated with his Bachelor of Arts degree.

Edward has appeared in commercials for Independent Film Channel (1998), Droid by Motorola (2013), etc.

He was seen in print ads for PRADA designer phone.

Norton was seen in PSA for The ONE Campaign.

Playing Mike Shiner in the Birdman or (The Unexpected Virtue of Ignorance) (2014).

Edward debuted with the 1996 neo-noir crime-thriller film Primal Fear for his supporting role as Aaron Stampler / Roy. He was nominated for 4 awards as a supporting actor and won all the 4.

In 2000 and 2013, Edward voiced the role of Devon Bradley and Reverend Elijah Hooper in Fox’s animated sitcom The Simpsons in 2 episodes.

As an actor, Norton has appeared as himself in the pilot episode of Comedy Central’s short-lived TV series Stella in 2005.

To play Derek Vinyard in the American History X (1998) film, he underwent a circuit workout, which he performed three times a week targeting his full body. It was aimed to increase his muscular growth.

Here are 5 exercises which he did during each workout session – 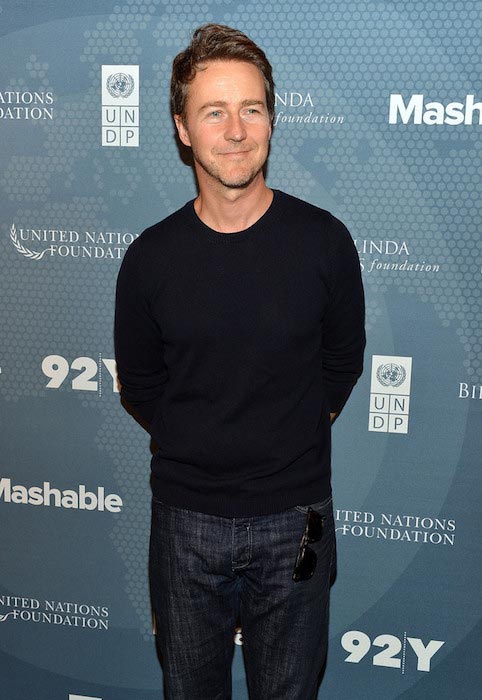