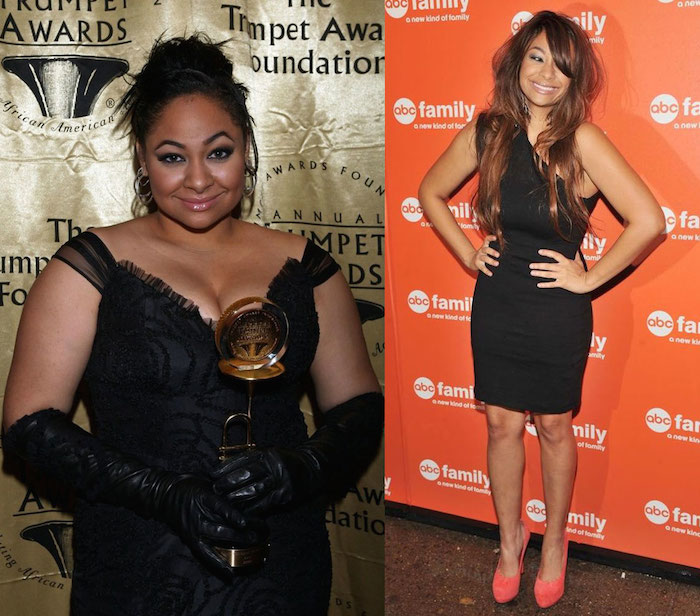 5 ft 2 in, enthralling beauty, Raven-Symone is an American actress, model, TV producer, and dancer. Having started her career as a child actress from The Cosby Show, Symone had her encounter with the pressure of shedding weight, way too early in her life. She shares that she began acting from the age of three and while she was still a teenager, she was prompted to melt weight by producers.

While sharing the reason of her weight gain, Symone tells that like other kids of her age, she was not privileged with a stress-free life. At a subtle age, when other teenagers were busy in talking about their proms, she was engrossed in mugging up the lines of her roles. It was the influence of the fidgety life that she became victim of stress, and her body had to pay the toll, as she went several pounds overweight due to that.

To purge her from the stigma of depression, after being done with the entire shooting of That’s So Raven, the sultry actress took long break to rejuvenate her body and mind. She did all the activities which she had been striving to do for so long. It was only after being relieved from stress that Symone adhered to balanced diet and dazzled us with her dramatic makeover.

The bombshell shed massive seventy pounds and appeared in slender and curvy figure in 2007. However, on being asked to express her views on weight loss, she smugly says that she was seldom unhappy with her weight. In fact, she felt herself sexier when she was 200 pounds and losing weight is not a matter of proud feeling to her.

The most sardonic part of her weight loss is, she shed weight at such a time when she was playing the role of a hefty comic woman in the TV Show, State of Georgia. And since she was no longer a bulky woman, she had to use cloth pads to render fat look.

Symone embraced regular workouts to strip off unsolicited pounds from her body. While hitting gym four times in a week, she executed thirty minutes of elliptical workout. Cardio workouts enhance your heart rate and blood circulation, and thus aid your body in catalyzing fat burning process.

Irrespective of her weight gain, Symone never stopped being comfortable with herself. She reckons, weight problem cannot snag you unless you allow it do that. Symone is as contented with her present weight as she was when she was 200 pounds. That’s a superb attitude indeed and we all shall endeavor to shadow the same attitude in our lives.

Here is one healthy recommendation for Raven-Symone fans seeking to acquire svelte figure like her. Don’t feel intrigued by detox plans to shed weight. Since your body is equipped with natural detoxification mechanism, you don’t have to stress about that. Moreover, process of detoxification being extreme to your body causes headache, nausea, anxiety, stress etc. And when you are stressed, you crave for evil foods like sugar, fats, salty foods etc. even more. Reason being, there is a release of dopamine hormone in your body with the consumption of these foods which make you feel good for some time.

Rather than abiding by them, it would be better if you make some alterations in your eating habits. For example, instead of eating snacks during meals, swap them with soups. Besides being low in calories, soups will nourish your body with vital nutrients. Apart from that, make red pepper an integral part of your meals. Being opulent in vitamin A, C, B6, folate, vitamin E, vitamin K, fiber etc., its consumption will rev up your metabolism and thus will speed up fat burning process in your body.