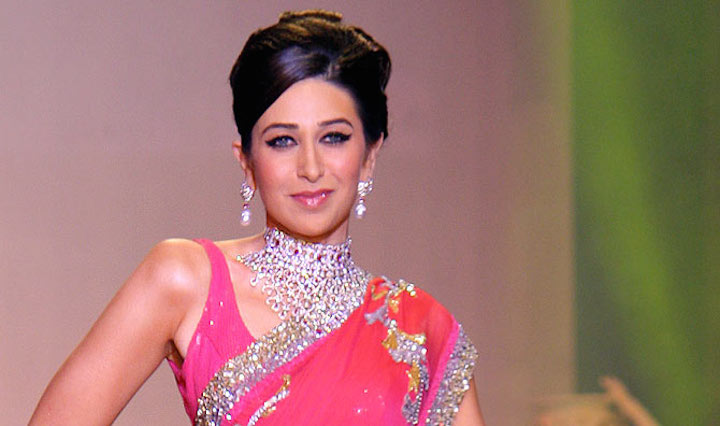 Flawless beauty, blue eyed Punjabi girl, Karisma Kapoor is an Indian actress. Belonging to the legendary Kapoor family of Bollywood, Karisma started her acting career from a very young age of sixteen. The famous actress of ’90s performed in myriad movies such as Jigar, Raja Babu, Coolie No.1, Jeet, and several others. Acting blood running in her veins had her win one national award and four Filmfare awards.

The iconic beauty said goodbye to her acting career after being married to Delhi-based business man, Sunjay Kapur. However, the marriage ended with divorce in 2012. The refreshing beauty tried something new this time. Instead of re-appearing on big screen, she made her entry in radio with “Big Memsaab” on 92.7 Big FM, which actually provided her great platform to bond with numerous women. The sexy mom of two indeed has been through a lot in her life. But that certainly failed to kill her zeal for life. Karisma is one of the actresses who is seldom seen out of shape. Her sculpted and toned hourglass figure indisputably makes her a diva. Karisma recently hit forty; however, she still looks two decades younger to her age. The bombshell attributes both her prudent diet and regular exercise regime for her svelte figure.

Naturally slim Karisma, being a big foodie, simply loves foods. She at the same time, being aware of the hostile influences of junk, processed, and unwholesome foods, indulges in them not very often. Karisma being very sensible and well-informed about diet-rules doesn’t blindly cut carbs from her diet. She rather prefers their consumption over protein because excess consumption of protein puts undue pressure on your kidney.

The refreshing beauty also detoxifies her body once in a while. However, she makes sure that she doesn’t totally forbid foods; she rather eats lesser food for one day. And her detox process remains confined to one day only. To keep herself energized, she consumes six to seven meals in a day. She reckons depriving your body from foods can never help you in shedding weight. The better approach is – continue restrained consumption of forbidden foods while abiding by healthy foods most of the time. She herself shed twenty-five pounds post pregnancy while swearing by the same formula. In addition to that, since the sultry actress believes in nourishing her body through organic foods, she relies heavily on veggies, fruits, fish, chicken etc. and steers clear from food supplements.

Let’s have a look at typical diet regime of Karisma.

Apart from that, she drinks ample amount of water in a day which keeps her hydrated and rejuvenated. In addition to that, to dissuade the consumption of surplus sugar, she drinks tea and coffee without adding sugar in them, which indeed cut bountiful calories from her diet.

The hottie admits that she has seldom overlooked her fitness. Since her childhood, she has been a fit girl. Karisma loves swimming and she doesn’t let go any chance of swimming with her kids. Among workouts, she mainly banks on yoga to uphold her archetype figure. Apart from executing various postures herself, she also educates her kids about them. In fact, her little girl accompanies the mommy in doing yoga. And at times when she finds it tough to practice other exercises, she makes sure that she goes out to walk briskly for one hour.

About gym workouts, she is not very fond of them, but she executes workouts under the supervision of her personal instructor three to four days in a week. Besides that, the pretty actress abides by physically agile schedule and performs various activities without being assisted by modern equipment. For example, instead of taking elevator, she prefers using stairs.

You being one of the fans of Karisma Kapoor might be prepared to do anything to have bikini embracing figure like her.

Well, you too can have an enviable figure like her, should you keep a watch on the foods you consume. There are bountiful foods which we inadvertently consume while considering them good for us. For example, we often overeat foods such as chiwda, diet chips etc. taking them as nutritious and low calorie foods. However, the fact is – they are no less in calories. Instead of eating these foods in high quantity, it’s better to eat few chips, or two pieces of cookies.

In the same way, we drink fruit juice taking it as a nutrient dense beverage. However, fruit juice being high in sugar and salt is no better than energy or soft drinks. Instead of drinking fruit juices, prefer drinking plain water. Likewise, if you turn a vigilant eye towards foods, you certainly can save yourself from bulking.