It was a time for jubilance and a lot of glamour as California played host to the 67th Annual Primetime Emmy Awards this Sunday (September 20). One of the biggest awards for the television fraternity, the awards saw the celebrities walk the red carpet in some of the best gowns, short dresses, latest collections from top designers and a lot of sparkle. Held at the Microsoft Theater in Downtown Los Angeles, California, the Emmy Awards were aired live on Fox and the host for the day was Andy Samberg. The best from the television industry were honored at the spectacular event on September 20, 2015.

Setting new records and breaking all old ones was the HBO series Game of Thrones that won 12 awards. It was also a historic event as Viola Davis became the first African-American woman to win an award for Outstanding Lead Actress in a Drama Series for How to Get Away With Murder. As the award ceremony unfolded, there were some celebrities who just stole the show with their fashion aesthetics and so Healthy Celeb has come out with the list of the top 10 best-dressed women at the event.

Read on and you will agree more with us. 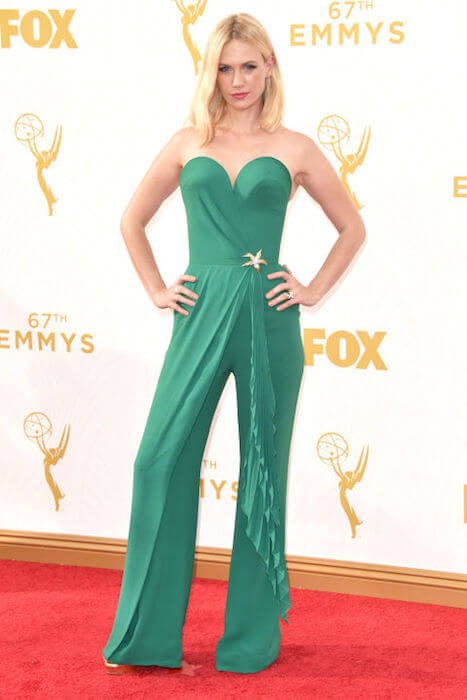 The 37-year-old Mad Men (2007-2015) actress, January Jones looked ravishing in her not so usual emerald green pantsuit by Ulyana Sergeenko. The off-shoulder jumpsuit fell gracefully on all the right places and showed off her petite figure just too well. The Last Man On Earth (2015-Present) actress was definitely a graceful presence at the 2015 awards. The star looked pretty elegant in her jumpsuit that she pulled off with panache. 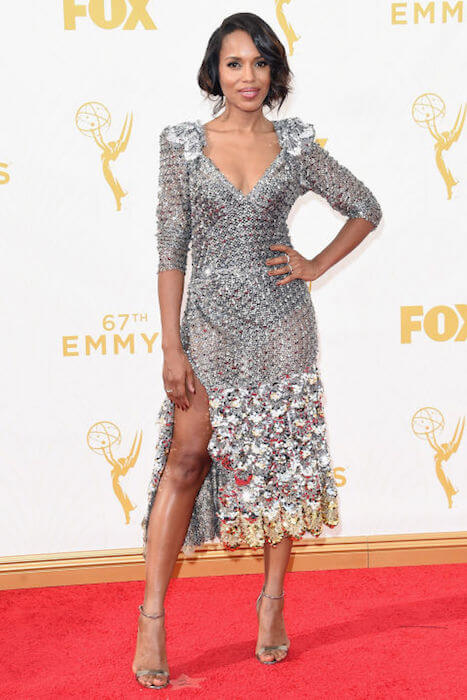 The 38-year-old television actress, Kerry Washington heated up the evening in a sexy silver frock with a high split from the Spring 2016 collection by Marc Jacobs that was just launched at the New York Fashion Week just days before. The Scandal (2012-Present) star paired her smart shimmery mesh dress with a pair of strappy silver heels by Casadei and she stunned in jewels by Harry Winston. Her long hair was pinned at the back and she was a style diva at the Emmy Awards. Even though she did not get nominated for any award this year, she bagged the best-dressed tag for sure. 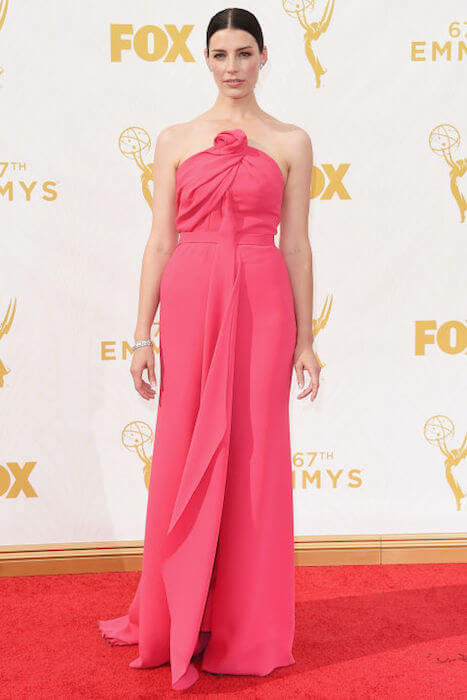 The Mad Men (2007-2015) actress Jessica Pare wore a Monse dress at the event. The 34-year-old looked lovely in the pink feminine gown that made her look like a goddess. The dress was a perfect pick for the evening and she completed the look with a pair of Christian Louboutin shoes and accessorized her dress with Fred Leighton jewelry. She was an eye-candy who just looked heavenly and deserves to be in the best-dressed list of women at the event. 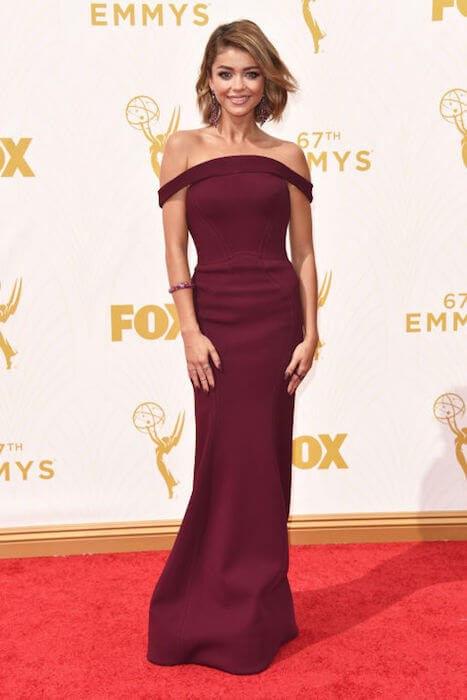 A modern princess is exactly what the 24-year-old actress looked like in her off-shoulder berry-colored dress by Zac Posen. The floor-length wine red dress accentuated her curves and the flared detailing at the knees added to the fashion quotient of the Modern Family (2009-Present) star. The American actress flaunted her bob hairstyle with panache and her red earrings looked chic. She sure knows how to carry herself well and won a place in the list of best-dressed women at the event without a doubt. 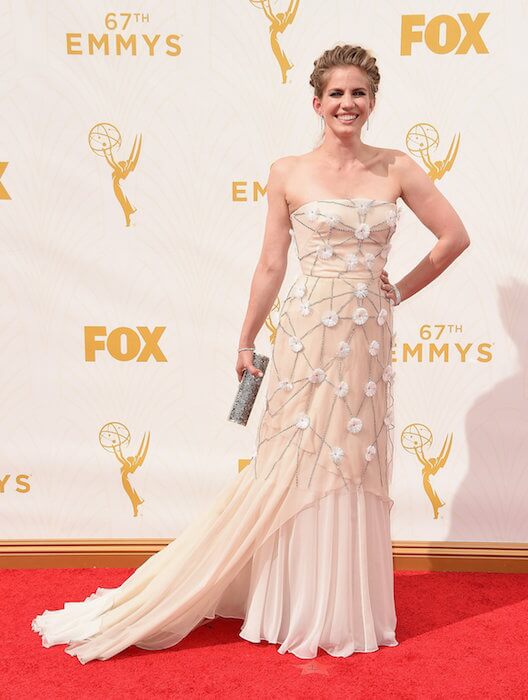 Famous for her comic act in HBO comedy series Veep (2012-Present), Anna Chlumsky looked gorgeous in an off-shoulder gown by Bibhu Mohapatra. The cream colored light gown made her look adorable and the actress who is also known for the 1991 movie My Girl, accessorized her dress with jewels by Chopard. Her hair was tied in a messy bun and it just rocked. Even though, Anna was nominated for an award and did not bag it, her dress won her good reviews from the fashion experts. 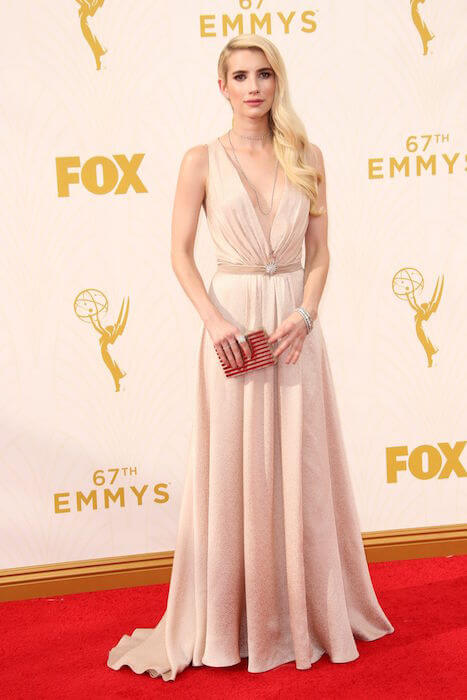 The 24-year-old Scream Queens (2015-Present) star stole the show in a long and flowy pinkish gown by Jenny Packham. The American actress and singer looked sexy as she flaunted her cleavage. The belt and the sun embellishment also looked stylish. Her wavy hair added to her charm. She wore heels by Giuseppe Zanotti and showed that diamonds are indeed a best friend to women as she wore diamond accessories including a necklace, bracelet and sealed the package with a trendy box clutch. 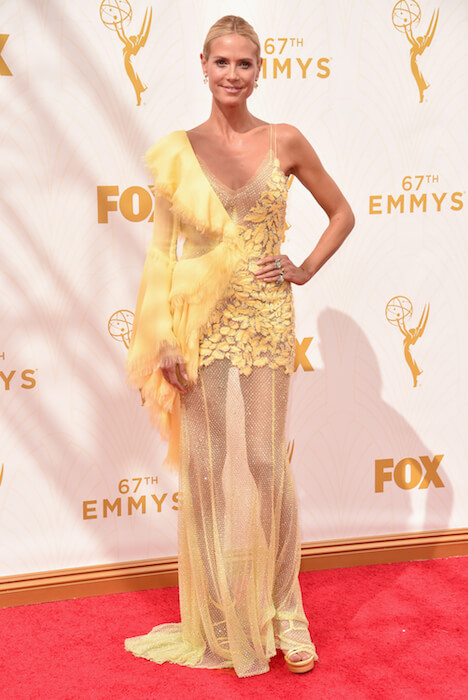 The 42-year-old Project Runway (2004-Present) actress put the younger lot to shame as she looked energetic and ravishing. She looked as bright as ever in her shiny yellow dress by Versace. The sheer, feathery gown made her stand out among the others and pulled back hair made her an elegant persona during the hot evening. The fringed sleeve on one side looked gothic and the deep slit reaching her thigh added to the mesmerizing effect. The hot evening was set on fire by the television actress. 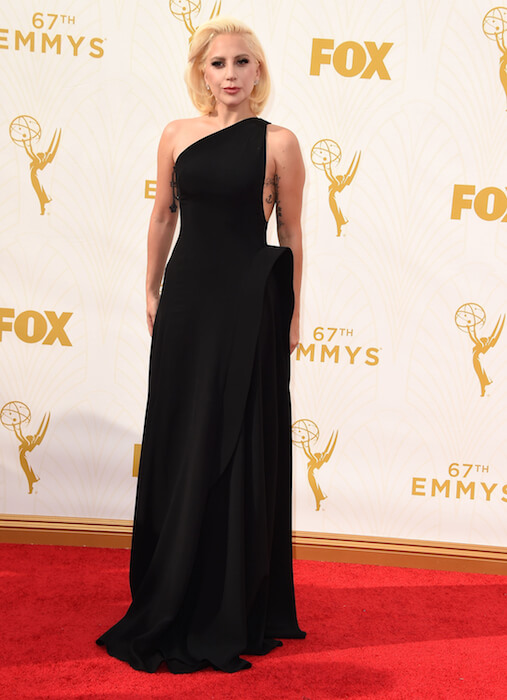 It sure was an evening of surprises and one of them was from the 29-year-old singer Lady Gaga who is known for her bizarre fashion sense. The star just left all jaws dropping in a simple yet sexy black gown by Brandon Maxwell. She looked glamorous in her dress that showed off her tattoos. The unexpected singer is all set to make her acting debut on television with the American Horror Story in October. The young icon looked like a Hollywood beauty and deserves to be in the list. 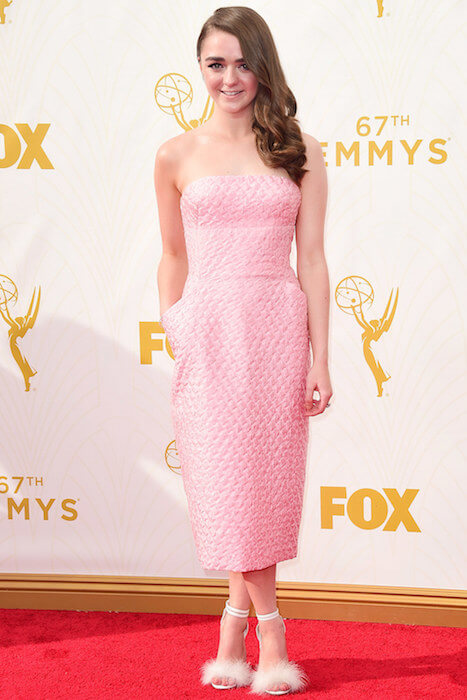 Even though Maisie Williams is just 18, her fashion sense is fabulous. She can be simply described as pretty in pink. The Game of Thrones (2011-Present) star looked fairy-like in an elegant pink midi dress by Ermanno Scervino. She made hearts flutter in the girly off-shoulder dress and her beauty was beyond words. The young star paired her dress with white furry strapped sandals and her penguin clutch complemented the ensemble. She is a sure shot winning candidate for this list. She is next going to be seen in the movie The Forest of Hands and Teeth. 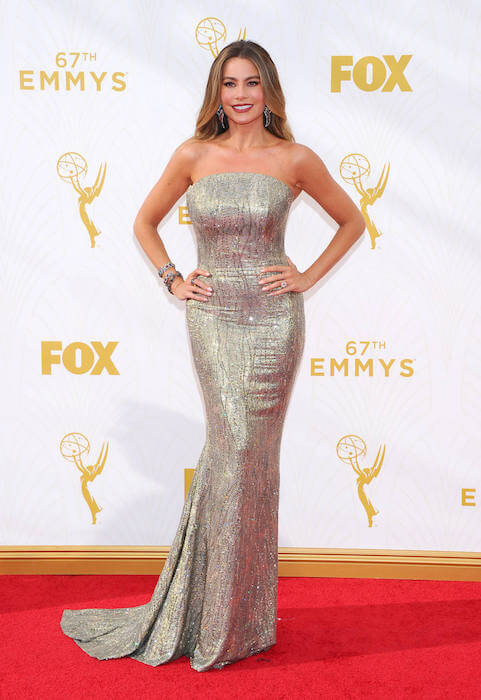 The 40s are the new 20s and making the temperature hotter was the 43-year-old Modern Family (2009-Present) actress who looked completely stunning in shimmering silver gown by St John. Her curves looked ravishing and she completed the look with a pair of sexy heels by Giuseppe Zanotti. For the accessories, she chose jewels from Lorraine Schwartz and we must say that the end result was just too much to handle. The actress is a must have in the best-dressed list of the evening.

If we talk about all the best-dressed people, it would take days and days as the event was extremely high on fashion and it sure is going to be an inspiration for the festive season ahead. The television industry is surely an impressive one and a look at the evening is enough to prove that point.