LeBron James is an American professional basketball player for the Los Angeles Lakers of the National Basketball Association (NBA). He has also been a part of teams like the Cleveland Cavaliers and Miami Heat and became the first player in NBA history to have won NBA championships with three franchises as Finals MVP. Regarded by many as one of the greatest NBA players in history, James is frequently compared to Michael Jordan in debates over the greatest basketball player of all time. Moreover, some of the player’s accomplishments include 4 NBA championships, 4 NBA Most Valuable Player (MVP) Awards, 4 Finals MVP Awards, and 2 Olympic gold medals as well as his record for all-time playoffs points, is third in all-time points, and eighth in career assists. 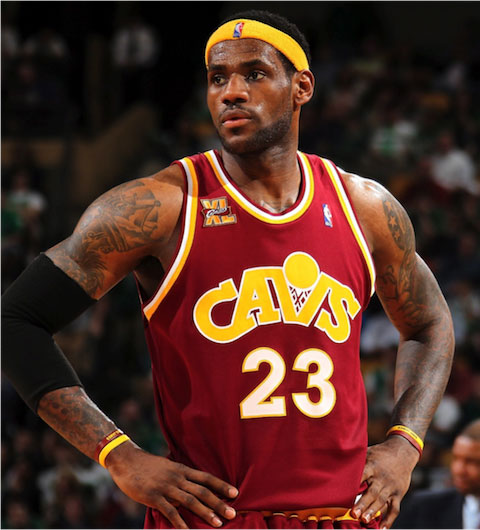 He has lived in places like Cleveland, Miami, and Akron in the past.

He attended the St. Vincent-St. Mary High School, a school that was actually a white private one.

He didn’t attend any college, as he had entered the NBA draft and was chosen by the Cleveland Cavaliers as the first pick.

In 2021, he planned to switch his jersey number from 23 to 6. He had first decided to do that when Anthony Davis had joined the Los Angeles Lakers in 2019 so that James could gift #23 to Anthony. However, Nike rejected the decision as they would have lost a lot of money because of that.

He is the two-time NBA champion, for two years in a row, with the Miami Heat. He is considered one of the best players that have ever played in the hardest basketball league in the world i.e. the NBA.

LeBron, many times, has been compared with the one and only “His Airness” Michael Jordan, despite the fact, he has a long journey to go through to win 4 more championships and reach Jordan, who has 6.

Great Athletic Ability – Probably, the best athlete in the whole NBA league, thanks to his great Vertical Jump and Speed numbers.

Massive Strong Build – The well-known basketball skill trainer, Ganon Baker once said that playing against LeBron is a total “nightmare.” He said so as he had once broken his finger when he accidentally stuck against LeBron’s body. In Baker’s own words –

“His body is like a steel, it’s so massive and strong.”

Great footwork – His footwork is so great, his steps are soft and he always knows, where to land after a layup or a dunk. This is the thing that actually keeps him injury free and makes him the wealthiest player in the whole NBA league.

Sick work ethic – He is considered as one of the hardest working basketball players.

Need to be more clutch – Lebron has been shy of taking the late-game responsibility for a long time, and this is the reason, why for many people, who watch the NBA, LeBron can’t be compared to Kobe Bryant or Michael Jordan.

LeBron appeared in his documentary movie More Than a Game in the year 2008.

The documentary is about LeBron’s friends and his basketball journey starting from the point when they were playing AAU together to the point, where all of them started to play basketball on a professional level.

He first appeared on television back in the year 1993 as a guest on the Late Show with David Letterman.

His NBA debut was back in 2003, at the Arco Arena in Sacramento, where he played against the Sacramento Kings. LeBron’s team Cleveland Cavaliers lost the game by fourteen and 106-92 was the end result. LeBron played for good 42 minutes and scored 25 points in all.

LBJ does many different types of training. He often does circuit training because that keeps him in the best shape for his basketball game and also builds the needed endurance in his muscles. Thanks to this, James can even push the sled with 30 kg on it. You can also see him do kettlebell exercises, weighted rope exercises, pull-ups, medicine ball throws, and much more.

He loves doing Yoga and works in the swimming pool, as these things help him relax his muscles and also provide great recovery for his body.

You can check the following videos, to see some of LeBron’s workouts.

You may want to check more stats…