Nicolas Cage is an American actor and filmmaker who has gained critical acclaim with his work and has been nominated for numerous major cinematic awards. He is known for his work in films like Leaving Las Vegas, Adaptation, The Rock, Kick-Ass, Honeymoon in Vegas, Racing with the Moon, Honeymoon in Vegas, Peggy Sue Got Married, Lord of War, Vampire’s Kiss, Con Air, Red Rock West, Drive Angry, Raising Arizona, City of Angels, Color Out of Space, Wild at Heart, Rumble Fish, Bangkok Dangerous, Windtalkers, The Wicker Man, The Runner, The Croods: A New Age, Gone in 60 Seconds, Snake Eyes, Mom and Dad, Dog Eat Dog, and several others. Moreover, he won an Academy Award, a Golden Globe, and Screen Actors Guild Award for his performance in the drama film Leaving Las Vegas (1995) and received his second Academy Award nomination for his performance as Charlie and Donald Kaufman in the comedy-drama film Adaptation (2002). 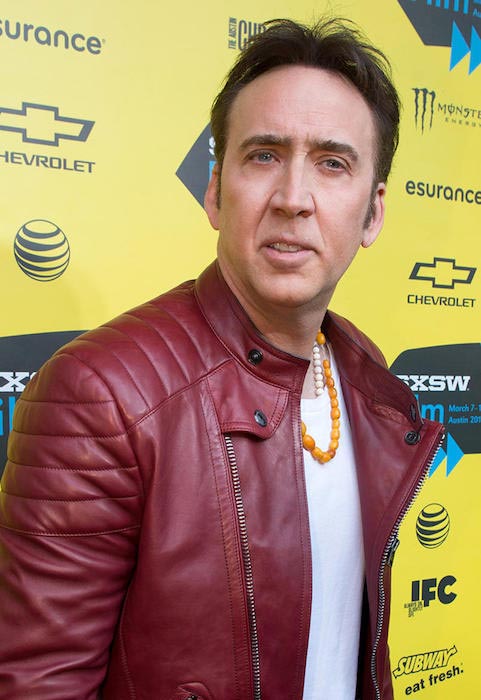 Cage finally went to UCLA School of Theater, Film and Television, but dropped out.

Nicolas Cage has been signed with –

In 2020, his net worth was $25 Million according to CelebrityNetWorth.com.

In 1999, Nick appeared in Sankyo pachinko machines commercials in Japan.

Later in 2006, he was seen in Montblanc watches.

He has also appeared in the Senova car commercial.

In 1982, Nicolas appeared in the coming-of-age teen comedy film Fast Times at Ridgemont High for his role as Brad’s Bud.

In 1981, Nicolas appeared in a TV pilot episode Best of Times for his role as Nic.

Nicolas practices Brazilian Jiu-Jitsu with Royce Gracie. Royce is the one who made martial art popular in the United States after his dad started it in Brazil.

Regarding diet, he is a non-vegetarian but doesn’t eat all types of animal meats because of an odd reason. He thinks pigs don’t have dignified sex, hence, he doesn’t eat pork. But, he eats fish, birds, fowl, and some others because he is okay with how they have sex.