Freida Pinto is an Indian actor and producer who has worked mainly in American and British films. She rose to fame by making her debut in the British drama film Slumdog Millionaire (2008), a loose adaptation of the novel Q & A (2005) by Indian author Vikas Swarup. This role got her nominated for the BAFTA Award for “Best Actress in a Supporting Role”, the MTV Movie Award for “Best Breakthrough Performance”, and the Teen Choice Award for “Choice Movie Actress – Drama” while she won the Palm Springs International Film Festival Award for “Breakthrough Performance”. She has also worked in movies and shows like Mira, Royal Detective, Mowgli: Legend of the Jungle, Guerrilla, Yamasong: March of the Hollows, Rise of the Planet of the Apes, Immortals, The Path, You Will Meet a Tall Dark Stranger, Unity, Day of the Falcon, Miral, Desert Dancer, Knight of Cups, Love Sonia, Hillbilly Elegy, Spy Princess, Blunt Force Trauma, India: Nature’s Wonderland, and Love, Wedding, Repeat. 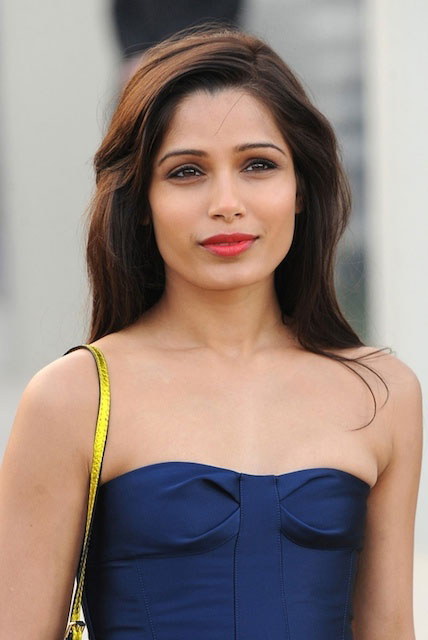 She majored in English literature and minored in Psychology and Economics from St. Xavier’s College, Mumbai.

She learned acting from The Barry John’s Acting Studio in Andheri, Mumbai.

As a model, she was signed to Elite Model Management India.

In 2020, her net worth was $14 Million according to CelebrityNetWorth.com.

She is of Konkani (Mangalorean) Indian descent. 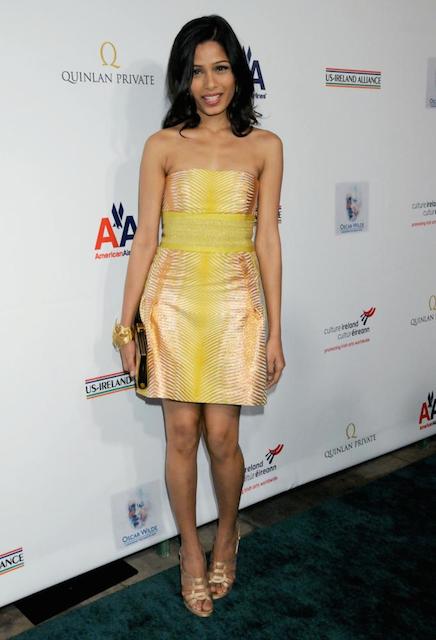 As a model, she has modeled for brands like Airtel, eBay, DeBeers, Škoda, Visa, Vodafone India, and Wrigley’s Chewing Gum.

She is also the ambassador of Plan USA’s I Am A Girl.

Pinto was announced as the ambassador for Audemars Piguet in July 2015.

She appeared in the 2008 drama film Slumdog Millionaire for her role as Latika. The film received numerous awards.

Freida takes good care of her diet. She keeps a check on her diet regularly.

To make herself look glowing, she drinks vegetable juices, which she makes herself. To make it taste a little bit different, she adds coriander and pepper.

In general, she eats fruits and other healthy stuff, but she takes, even more, care of her eating habits if she is preparing the desired body for a film. She sometimes even skips fruits as they contain sugar.