Jude Law is a critically acclaimed English actor, film producer, voiceover artist, theatre actor, and director who is known for his roles such as Dickie Greenleaf in The Talented Mr. Ripley, W.P. Inman in Cold Mountain, Dr. John Watson in Sherlock Holmes, Lenny Belardo/Pope Pius XIII in The Young Pope and The New Pope, Sam in The Third Day, Joe Barnes in The Case-Book of Sherlock Holmes, Albus Dumbledore in Fantastic Beasts: The Crimes of Grindelwald, Vortigern in King Arthur: Legend of the Sword, Yon-Rogg in Captain Marvel, Gigolo Joe in A.I. Artificial Intelligence, Vasily Zaytsev in Enemy at the Gates, Lord Alfred Douglas in Wilde, Billy Hanson in Midnight in the Garden of Good and Evil, and Ted Davidoff in A Rainy Day in New York. Moreover, he has also been cast in theatre productions like Les Parents terrible, Anna Christie, Hamlet, ‘Tis Pity She’s a Whore, The Caucasian Chalk Circle, and Henry V. 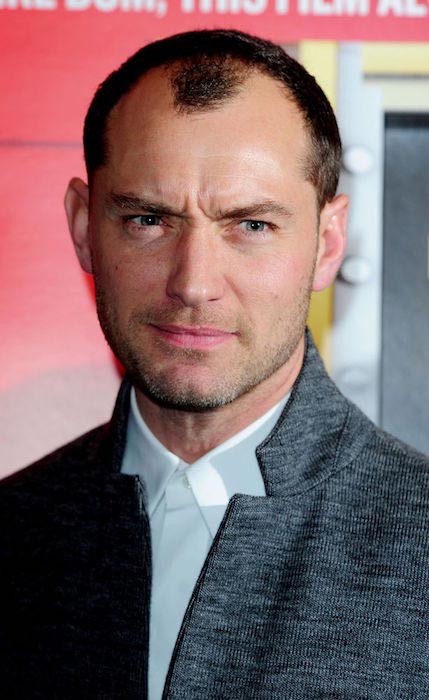 He also went to Alleyn’s School in Dulwich, south London.

Both his mom and dad were orphans.

Jude has been represented by these agencies –

He is of English, Welsh, and Scottish descent.

Jude Law’s body specifications may be –

He also appeared in PSA for Respect for Animals, UK in 2007.

In 2008, Law was seen in Dunhill luxury goods for men.

Playing Dickie Greenleaf in the psychological thriller film The Talented Mr. Ripley (1999), as Gigolo Joe in the science fiction film A.I. Artificial Intelligence (2001), W.P. Inman in the Cold Mountain (2003), as Harlen Maguire in the Road to Perdition (2002), as Dr. John Watson in the Sherlock Holmes film series.

He first appeared in the 1989 film The Tailor of Gloucester for his role as Sam, Mayor’s Stableboy. It was an ITV Christmas Special broadcast.

In 1990, Jude appeared in the ITV’s daytime soap opera Families for his role as Nathan Thompson.

For playing the title role in the 2013 film Dom Hemingway, Jude had to gain 30 pounds. So, he stopped doing exercising and started eating all the wrong stuff (which he was not supposed to eat otherwise) such as red meat, burgers, ice-creams, steaks, etc. He even drank 10 cokes per day.

When the project ended, he breathed a sigh of relief as he wanted to run and do exercise and started working on his body to lose those extra 30 pounds.

You can also take a look at his workout routine for the 2010 film Repo Men, where he played Remy. He worked with trainer Lisa Twight to get himself in shape. The workout started a couple of months before the filming started. He did a full-body workout and did exercises such as deadlifts, drag chains, pull-ups, etc.