Serena Williams is an American retired professional tennis player who has claimed the world’s no. 1 position in women’s singles tennis and has also won at least 23 Grand Slam singles titles, the most by any player in the Open Era. In 2011, she became one of UNICEF’s International Goodwill Ambassadors and released her solo autobiography On the Line after the 2009 US Open.

She was homeschooled by her dad Richard.

When she was aged 9, she went to Rick Macci’s academy in West Palm Beach, Florida to sharpen her lawn tennis skills.

Her career is managed by Jill Smoller of WME-IMG agency.

Serena Williams has appeared in lots of TV commercials –

She has also made appearances in print ads –

In 2021, she appeared in Michelob Ultra’s Super Bowl Commercial alongside popular athletes like Anthony Davis, Peyton Manning, Brooks Koepka, and many more.

She once said, “Olympia doesn’t celebrate birthdays. We’re Jehovah’s Witnesses, so we don’t do that.”

Staying at #1 (which she achieved in July 2002) in women’s singles tennis as per the Women’s Tennis Association.

She portrayed the role of agent Ross in the 2004 comedy film Hair Show.

In 2001, she gave her voice to the animated sitcom The Simpsons during the episode entitled “Tennis the Menace.”

However, as an actress, her debut television appearance was in ABC’s black sitcom My Wife and Kids as Miss Wiggins in an episode entitled “Crouching Mother, Hidden Father” in 2002.

Serena doesn’t take cheat days because she just can’t. Her cheat days are actually “cheat months”. Her favorite food is Southern food. She never eats healthy, whenever she is in South Carolina.

But, she tries to eat mostly healthy stuff. She is also allergic to wheat. So, she does not eat such gluten-containing foods.

She does a variety of workouts to stay fit and maintain a curvier body. She basically does running for 10 minutes, followed by certain dance steps. She has also tried yoga and other fitness activities.

After a workout session, she eats a Gatorade bar to gain energy (carbs) and protein. 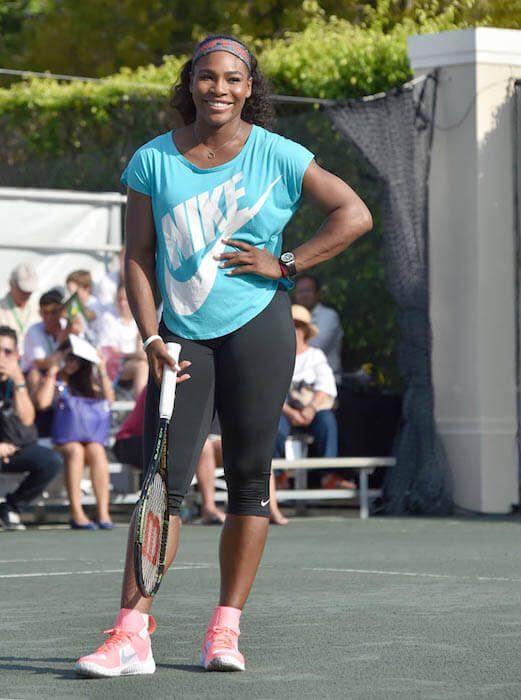